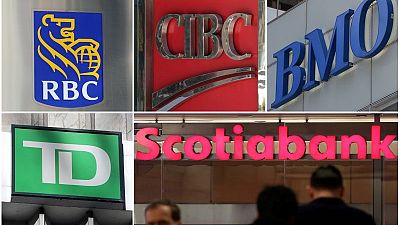 TORONTO (Reuters) – Canadian banks’ commitments to “net-zero financed emissions” by 2050 have drawn doubts from many investors, given the lack of a defined goal, details and their continued support for oil and gas companies, even if partially aimed at helping them transition to alternatives.

But their growing funding for green projects also presents a dilemma for shareholders who might want to divest.

The situation highlights the largely Canadian quandary faced by both the banks and their investors. Even in their quest to shrink financing for big emission-producers, the lenders cannot withdraw from an industry that accounts for about a tenth of the economy, despite its being responsible for over a quarter of emissions.

Over the past five months, Royal Bank of Canada (RBC), Toronto-Dominion Bank and Bank of Montreal, have announced plans to achieve net-zero emissions, but lacked details including a definition of that goal, interim reduction targets and plans to move away from traditional energy sources.

The six biggest banks account for nearly 90% of the industry’s revenues and move in tandem on strategic shifts, including climate initiatives, which leaves shareholders with few local alternatives.

“The challenge with the current push to divest banks because they’re involved in fossil fuels is that these are the very same banks critical to help meet many of our goals in alternative energy and sustainable financing,” said Jamie Bonham, director of corporate engagement at NEI Investments, which holds shares of the five banks.

Canadian banks’ outstanding loans to the oil and gas sector has stayed at the levels of two years ago, although it fell by 9.7% to C$47.5 billion ($42.2 billion) from a year earlier as of Jan. 31.

They remain some of the biggest financiers of fossil fuel producers globally, with TD the world’s top oil sands banker and RBC Canada’s biggest financier of fossil fuels, in 2020, according to the Rainforest Action Network https://www.ran.org/wp-content/uploads/2021/03/Banking-on-Climate-Chaos-2021.pdf. RBC, TD and Bank of Nova Scotia were among the 12 worst banks for fossil fuel financing globally between 2016 and 2020.

Reports from the banks show none of the proceeds of green bonds they issued last year went to renewable projects by traditional energy companies.

Their reluctance to step away from financing fossil fuels makes them laggards compared to their global counterparts, particularly European ones like BNP Paribas https://www.reuters.com/article/us-bnp-paribas-shale-idUSKBN1CG0E3 and ING Groep that have distanced themselves from shale and/or tar-sands related oil and gas projects.

“When we set the net-zero target, that wasn’t, for us, about divestment,” said Andrea Barrack, TD’s global head of sustainability and corporate citizenship, in an interview with Reuters. “We’re a major corporation in a country where a lot of… people’s livelihoods depend on (the oil and gas) industry. We take those obligations seriously.”

TD’s 2021 ESG report, expected to be released next year, will include some interim goals, Barrack said.

For more details on how Canadian banks are approaching their net-zero emissions targets, see

Despite the dilemma, some investors are taking action.

Amelia Meister, senior campaigner at retail investor group SumOfUs, which represents about 1,700 retail shareholders of Canadian banks, said some members have divested their bank shares, and over 2,500 have said they will move their money from the banks to credit unions.

“We don’t necessarily know what their internal definitions for low carbon are,” Meister said. “Some define low carbon as light natural gas, which is still a fossil fuel.”

The banks should disclose milestones for achieving net zero emissions, including explicit criteria and timelines for withdrawing from activities not aligned with the Paris Agreement, said Emily DeMasi, senior engager for EOS, a stewardship service provider at Federated Hermes, representing investors who hold about C$3.3 billion of TD shares.

They should also show how they are incentivizing clients to reduce emissions, she said.

If they don’t move quickly enough, EOS could band together with other investors, file shareholder resolutions and vote to remove directors, DeMasi said.

None of the big Canadian banks has joined the Net-Zero Banking Alliance, which commits to finding pathways to net-zero emissions by 2050. VanCity, the biggest credit union, which has never financed fossil fuel companies, is the only Canadian financial institution in the alliance.

“To be ahead on climate transition risks banks would need to transition their (portfolios) quicker than the economies where they are present,” Ramos Martin said. “Importantly, for us investors to follow up these efforts we need a great deal of disclosure, which currently is lacking.”

Meister blamed the banks for some of Canada’s continued outsized reliance on traditional energy.

“Canadian banks dragging their heels has put our economy in a worse situation for the transition.”