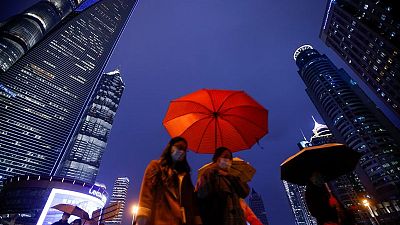 SHANGHAI (Reuters) – China has ramped up a crackdown on financial scams, from cryptocurrency swindles to bogus patriotic fundraising that capitalizes on the coming 100th birthday of the ruling Communist Party, as new anti-fraud rules take effect on Saturday.

In recent years, China has shut roughly 6,000 peer-to-peer (P2P) platforms in a purge of an industry that still owed victimized investors over $100 billion as of last August.

But financial frauds are mutating in their complexity and widening, according to China’s banking regulator, which last week called for a tougher crackdowns Last year, China busted over 7,500 financial scams, according to the regulator, up 27% from the previous year.

The clampdown on swindlers comes as rules combating illegal fundraising come into force on May 1, putting the onus on local officials to kill off investment scams at an early stage, said a local financial regulator who attended several mobilization conferences this week.

“Previously, you asked victims to go to court. Now, victims can bring officials to court for negligence of duty,” said the official, who is not authorized to speak to the media and declined to be identified.

The crackdown is also aimed at ensuring social stability ahead of the July 1 party anniversary, a highly sensitive event, the official said.

In Shanghai alone, more than 20 platforms had been crowd-funding for alleged “red” movie and TV programmes dedicated to the political event, which is not allowed without government consent.

The platforms, including Multi Accumulate and Zhongyan Group, were told by the Shanghai government to stop such projects and take corrective measures, according to the source.

Banks are now cooperating with local governments to identify suspected illegal investment schemes in cryptocurrencies, according to a regulatory source and a blacklist of bank accounts seem by Reuters.

As bitcoin prices surge, there has been a boom in Filecoin trading in lower-tier cities as investors seek alternative cryptocurrencies to bet on. Some banks have also flagged scams using China’s sovereign digital currency, e-CNY, as bait.

Other targets of the crackdown include private equity, wealth management, and real estate investment schemes, the banking regulator has said.

In early April, the city of Shenzhen launched a probe into the operator of real estate content provider Shenfangli for possible illegal fundraising and property speculation, while the Shanghai government probed an illegal stock recommendation business under financial news aggregator Wallstreetcn.com.

“These are high-profile cases with which the local governments hope to send a clear warning signal to others in the market,” said the regulatory source.

The new regulations state that officials who fail to promptly tackle frauds will punished.