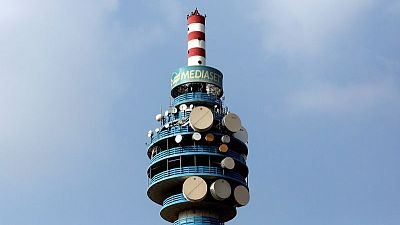 MILAN (Reuters) -Vivendi and Mediaset are working on the terms of a possible deal to end their years-long legal war, two sources close to the matter said on Thursday, as shares in the Italian broadcaster hit a 17-month high on the prospect of a truce.

The two media companies have been at loggerheads since 2016, when Vivendi walked away from a pay-TV deal and then built a 29% stake in Mediaset, which the Milanese group considers hostile.

A settlement with Vivendi would help Mediaset to pursue a plan it unveiled on Monday to move its legal headquarters to the Netherlands making it easier to build alliances with peers across Europe.

Vivendi, which is Mediaset’s second-biggest investor, had succeeded in stopping in court a similar project in the past.

Shares in Mediaset, which is controlled by the family of former Italian Prime Minister Silvio Berlusconi, rose as much as 7.5% on Thursday, to their highest level since end-November 2019. They had gained 8.4% on Wednesday thanks to investor bets on a compromise.

Lawyers for the two groups are hard at work drafting an accord which may be signed off on as early as this week, the two sources said. The sources also said that similar efforts had hit a wall in the past.

A third source said no board meeting had been called at Mediaset to discuss a potential deal.

Mediaset’s shareholders are due to vote on the plan on June 23 and Vivendi has the power to block it after regaining full voting rights on its stake thanks to favourable court rulings.

The potential compromise may entail Vivendi cutting its stake in Mediaset over time, one of the sources said.

Daily MF said that, as part of the potential accord, Mediaset could decide to pay a 0.3 euro per share dividend on 2020 results, which is not planned at the moment, allowing Vivendi to cash in around 100 million euros ($120 million).

On the other side, the French group would pay up to 25 million euros to end certain pending disputes and agree to sell two thirds of its stake in Mediaset – currently parked in a trust called Simon Fiduciaria – over five years, MF said.