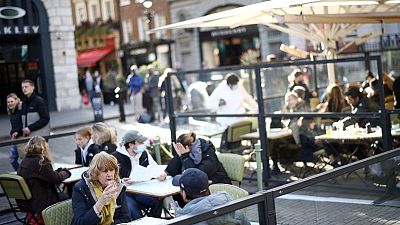 LONDON (Reuters) -British employees returned to work and shoppers stepped up spending on clothes and furniture after lockdown restrictions eased across most of the country earlier this month, official figures showed on Thursday.

The proportion of employees on furlough between April 5 and April 18 dropped to 13%, down from 17% in the previous two-week period, according to a survey of businesses conducted by the Office for National Statistics.

Shops selling ‘non-essential’ goods reopened in England and Wales on April 12, and English pubs and restaurants were able to serve customers outdoors. COVID restrictions are also easing this month in Scotland and Northern Ireland.

The ONS said spending on what it calls ‘delayable’ goods such as clothes and furniture rose to 10% above pre-pandemic levels in the week to April 22, up by 21 percentage points from the week before when shops began to reopen.

Overall spending on credit and debit cards was now 98% of its level in February 2020, up from 91% the week before, based on high-value CHAPS payments data from card processors collected by the Bank of England, the ONS said.

However dining and drinking outdoors – during a period of chilly weather for the time of year – has been less appealing.

After a rush of demand on the first day that pubs and restaurants reopened, the level of reservations on April 24 was 62% of its level on the same Saturday two years earlier, similar to the 60% seen a week before.

Pubs and restaurants in England are expected to be allowed to resume indoor service, subject to social distancing requirements, on May 17.