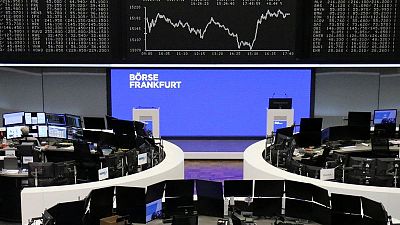 (Reuters) -European stocks inched higher on Friday, as strong corporate earnings and optimism about an economic recovery from the COVID-19 pandemic put the benchmark STOXX 600 on course for its third month of gains.

Broadly, European earnings have come in much stronger than expected, with a higher than usual 71% of companies beating profit expectations in the first quarter, according to Refinitiv IBES data. A third of STOXX 600 companies have published results so far.

“Expectations are high, companies are beating even these elevated expectations, and yet the market is responding with caution,” Lewis Grant, portfolio manager at Federated Hermes wrote in a note.

“At current valuations, and with much pandemic related uncertainty remaining, many investors are more concerned about downside than upside.”

Barclays tumbled 5.3% despite reporting a quarterly profit that more than doubled, while France’s BNP Paribas slipped 2.5% on higher costs.

All eyes are now on the euro zone’s GDP data due at 0900 GMT, with the economy forecast to have shrunk 2% in the first quarter versus a 4.9% fall in the final quarter of last year.

Data showed the German economy contracted by a greater-than-expected 1.7%, hit by renewed lockdowns, while the French economy grew more than expected.

Swiss Re gained 3.9% as the reinsurer swung to a quarterly net profit and said it believed claims related to the pandemic will diminish.

(Reporting by Sruthi Shankar in Bengaluru; Editing by Subhranshu Sahu and Shounak Dasgupta)