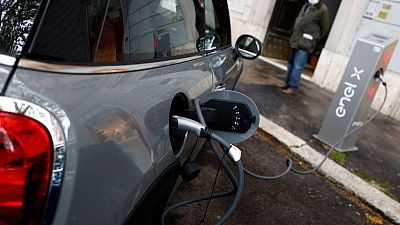 By Gavin Jones and Stephen Jewkes

ROME (Reuters) – The European Union is billing its 750-billion-euro pandemic Recovery Fund as the opportunity of the century to transform the region’s economy and help it lead the world in reducing carbon emissions.

But a closer look by environmentalists at the spending plans prepared by Italy – the biggest recipient of EU cash – raises questions about how green Rome’s contribution will be, how it will be measured and even what investments can be classed as “green”.

They have criticised the plan presented to parliament this week as falling well short of the revolution that was promised.

Mario Draghi’s government aims to submit the 273-page document to Brussels on Friday to obtain more than 200 billion euros ($242 billion) from the kitty aimed at making the bloc’s 27-member states more ecological, digital and resilient.

The EU requires the largest slice of the investments in each country – some 37% – to go towards projects that will green the region’s economy. But ecological lobbyists and think tanks say Italy’s plan does not meet the threshold.

“A not very green Plan,” is the headline of a report by Greenpeace Italia, which gathered outside parliament this week with other Green advocates to protest against what they see as a lack of ambition on the environment.

Draghi’s document offers 59 billion euros of EU money under the ecological transition heading, to be spent over the six years of the plan – some 10 billion less than the draft prepared by his predecessor Giuseppe Conte, who lost power in January.

That amounts to 31% of the EU funds, versus the 37% prescribed. Draghi has topped this up with 9 billion euros of separate government borrowing, but lobbyists point out this money will not be subject to Brussels’ scrutiny and can therefore easily be revoked.

Draghi told parliament this week green policies feature in several of the six chapters of his plan, not just the “Green Transition” one, meaning that Brussels’ 37% target was met.

The European Commission has two months from the moment it gets a national scheme to check it meets the criteria. EU finance ministers then have another month to evaluate them.

One official said this week many countries were planning to spend as much as 50% of their funds on green projects but that in any case, all plans would be carefully scrutinised.

More specifically, objectors say Draghi’s plan offers little for conversion to electric transport, vital for the cities of Italy’s industrial north which are among the most polluted in Europe, or for a conversion to organic, less intensive farming.

Rome has raised doubts about forcing the pace on electric cars if batteries are not charged by power from renewable sources.

Yet Greenpeace Italia said that is not even being done. Draghi’s plan to extend Italy’s urban public transport lines by some 240 kilometres (150 miles) is adequate for Rome alone, it said.

Germany will receive much less EU Recovery Fund money than Italy, but plans to use more than 5 billion euros of it for measures to favour electric and hybrid vehicles.

Electric transport is also a cornerstone of the Spanish plan, which dedicates 6.5 billion euros to “sustainable, secure and connected mobility” in cities.

ECCO also accuses the government of having “no strategy for renewable energy.”

Its goal to install 4,200 extra megawatts from renewable power sources is only sufficient to ensure Italy meets the quota of renewable energy recommended by the EU for a single year, the think tank said in a report.

Italian energy firms say the real problem is a labyrinthine process which means it can take years to get permits for new solar and wind capacity.

Italy’s biggest utility Enel reckons at current rates it would take some 100 years to reach solar power targets for 2030.

“We have the strength to install 6-8 gigawatts a year but to do that we have to change the rules… and now,” says Cingolani.

Much of the Recovery Plan’s energy strategy is based around the use of hydrogen, but environmentalists complain it does not spell out how the gas must be produced.

Hydrogen is not necessarily “green” because it can be generated from fossil fuels that Italian energy companies continue to invest in.

Green hydrogen, made by electrolysis using renewable power from wind and solar, is currently too expensive for widespread use and Enel has previously said electrolysers need to cost six times less to make it viable.

ECCO said that with no decisive push towards renewable energy or electric transport, Italy’s plan risked being mere

“greenwashing, in the interests of state companies that aim to maintain a system based mainly on fossil fuels.”

Cingolani’s illustrious scientific career has focused on areas such as robotics and nanotechnologies rather than climate change. Some observers suggested he may have been a better fit at the infrastructure ministry which went to Enrico Giovannini, who is instead a prominent expert in sustainable development.

In his maiden speech to parliament in February Draghi said “we want to leave a healthy planet, not just a healthy currency.” Some environmentalists doubt the former European Central Bank chief’s Recovery Plan matches that commitment.