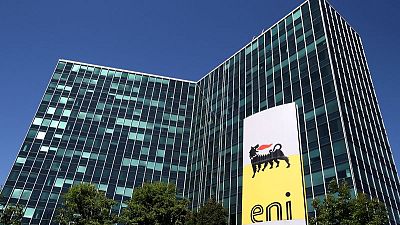 MILAN (Reuters) -Italian energy group Eni is planning to spin off a minority stake in its new retail and renewable business next year, it said on Friday, after announcing first quarter profits that missed expectations.

Several European energy companies, including Spain’s Repsol, aim to divest parts of their renewables business to raise money to reduce debt and pay for the shift away from oil and gas.

Eni said in a statement it planned to list or sell a minority stake in the business that includes renewable energy and retail energy sales next year, confirming a Reuters report from March.

Analysts at Jefferies said the business, which has 10 million customers and plans to grow green power generation to over 5 gigawatts by 2025, could be worth 9 billion euros ($10.89 billion) including debt.

The result was below an analyst consensus of about 440 million euros, in part because of weak gas prices and refining margins. Cash flow from operations fell 12% to 1.6 billion euros.

“That’s less scope for upwards estimate revisions that peers will benefit from coming out of earnings,” said Bernstein in a note.

“We have been able to improve our outlook for the coming months, forecasting free cash flow generation in 2021 of more than 3 billion euros,” Chief Executive Claudio Descalzi said.

The group confirmed its full-year production target of about 1.7 million barrels of oil equivalent a day and said it would be investing around 6 billion euros this year.

Eni said its share buy-back programme was expected to resume with a Brent reference price of at least $56.