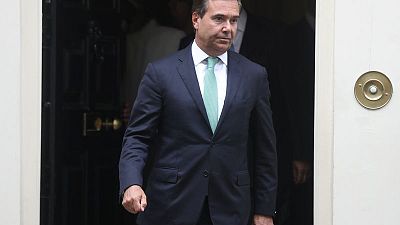 ZURICH (Reuters) – Antonio Horta-Osorio will need to draw deeply on the lessons he learned in turning around British bank Lloyds when he joins Credit Suisse as its new chairman on Friday.

As one of Europe’s longest-serving bank CEOs, he has received plaudits for bringing Lloyds back from the brink in 2011, when in an interview this month he said it was “about to die” after having to be bailed out during the financial crisis.

At Credit Suisse another one of banking’s toughest jobs awaits “AHO”, as the 57-year-old was known at Lloyds, dealing with damage from both the implosion of U.S. investment firm Archegos and the ramifications of the insolvency of British supply chain finance firm Greensill.

Combined, these have triggered multi-billion dollar losses, sackings and bonus cuts at Credit Suisse, just as other banks are riding bumper trading and dealmaking profits.

The fallout continued just hours before the annual shareholder meeting was set to begin when the bank said Andreas Gottschling, head of the board’s risk committee, will not stand for re-election.

While Switzerland’s second-largest bank is investigating what went wrong, its chief executive Thomas Gottstein has flagged a deeper review of the bank once Horta-Osorio arrives.

“At Lloyds he was quite efficient in reorganizing. He sold non-core and toxic assets relatively successfully, cut costs to the core and restored the bank to profitability and full private ownership,” said Guy de Blonay, a fund manager at Jupiter.

The Portuguese banker’s Lloyds tenure spans the same decade as the outgoing Credit Suisse chairman, but Urs Rohner’s time has been marked by upheaval and doubts over the Swiss bank’s long-term direction.

A lawyer by training, and CEO of German television and radio broadcaster ProSieben before joining Credit Suisse as general counsel in 2004, Rohner faced fierce criticism as it endured a series of losses and scandals in the last five years.

While Lloyds shares have fallen around 25% under Horta-Osorio, Credit Suisse’s stock has lost nearly three-quarters of its value under Rohner.

With the appointment of Tidjane Thiam as CEO in 2015, Rohner had set his sights on de-risking the bank and making wealth management its focus, two sources familiar with the matter said.

Yet despite the turnaround kickstarted by Thiam, who left last year after a clash with Rohner over a spying scandal, Credit Suisse remains exposed to risky trades and relationships.

It lost over $5 billion related to prime brokerage client Archegos and faces further fallout from more than $10 billion in Greensill-related funds.

Including the Archegos charge, writedowns and penalties paid by Credit Suisse since late 2015 total more than $15 billion, while it is facing at least three enforcement proceedings by Swiss financial market supervisor FINMA.

Rohner has largely steered clear of the spotlight following the bank’s most recent run of problems. But he and Horta-Osorio have been in contact in recent months, one source familiar with the matter said, in order to secure a smooth handover.

Horta-Osorio focused on expanding relatively sedate retail banking, insurance and wealth management businesses at Lloyds and during his final results call on Wednesday, said returning it to private ownership in 2017 was the highlight of his tenure.

“More important than that was the journey along the way … achieving the purpose of helping the real economy of the UK to the extent we could,” he said during a media call.

However Horta-Osorio has not had an easy ride, facing scrutiny over his high pay relative to other British bank bosses, his handling of a historic fraud case and an industry-wide payment insurance mis-selling scandal that ultimately cost Lloyds 22 billion pounds and took years to resolve.

And he has talked publicly about struggles with stress and insomnia as Lloyds was roiled by the 2011 eurozone crisis.

“That led me to a period of exhaustion as you know where I had to take a few weeks out and then came back. Those were very bad days,” Horta-Osorio said this week.

Analysts say his experience working through misconduct issues should prove helpful as he enters Credit Suisse at a moment of risk management crisis.

“He is known for very strong attention to detail and drive and we assume that risk management will be at the top of his agenda,” Maria Rivas, Senior Vice President of Global Financial Institutions at DBRS Morningstar, said.

(Reporting by Brenna Hughes Neghaiwi and Oliver Hirt in Zurich; Additional reporting by Iain Withers in London and Matt Scuffham in New York; Editing by Alexander Smith and Jane Wardell)