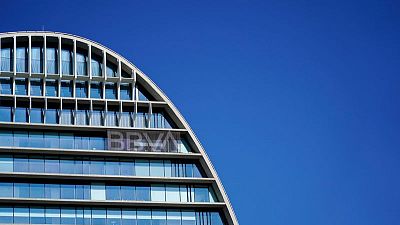 MADRID (Reuters) -Spanish banks BBVA and Sabadell showed signs on Friday that they are bouncing back from the effects of the COVID-19 pandemic, signalling lower future bad debt provisions and producing stronger than expected first-quarter profits.

Like other Spanish lenders, both banks are benefiting from a recent improvement in the macroeconomic outlook for the second half of the year after costly pandemic related provisions in 2020. BBVA did not set aside COVID-19 provisions in the quarter.

Spain’s economy contracted 0.5% in the first quarter against the previous quarter, but the Bank of Spain expects a strong rebound in the second half of the year.

Both banks, which last year called off merger talks, were hit by a decline in lending income, showing how banks in Europe are still under pressure from low interest rates in addition to looming bad debts in the medium term.

But the cost of risk, which measures the premium of managing credit risks and serves as an indicator for potential losses in the future, fell at both lenders.

BBVA’s cost of risk fell to 117 basis points from 151 bps as end-December, stripping out the recent sale of its U.S. business, while Sabadell’s fell to 69 bps from 86 basis points.

Shares in BBVA rose just 0.2% as the outlook for future lending income was mixed depending on the country. In Spain, for example, BBVA’s CFO, Jaime Saenz de Tejada, is expecting a 1% to 2% decrease in 2021.

Shares in Sabadell rose 6.5% and are up 37% year-to-date after erasing two thirds of its market value in 2020. The bank beat forecasts with a 73 million euro net profit in the quarter, thanks also to a return to profit at its UK business TSB.

Brokers, including Jefferies, welcomed the fact that Sabadell expected to benefit from future tailwinds in lending income and a pick-up in banking revenues from the second quarter onwards.

To cope with the pandemic, BBVA last year sold its U.S. business, generating around 8.5 billion euros to focus on cost cutting measures in Spain, and potentially buying back as much as 10% of outstanding shares, which it could start in the fourth quarter.

The bank said the U.S. sale and the target share buy-back would put its pro-forma fully loaded core-tier 1 capital ratio, the strictest measure of solvency, at 13.55%.