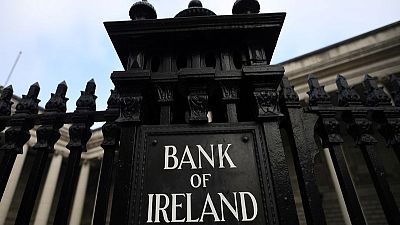 DUBLIN (Reuters) – Bank of Ireland reported stronger-than-expected income for the first quarter on Friday noting it had seen limited adverse impact on customer loans from longer lockdowns in its home market and its smaller UK operations.

Ireland’s largest bank by assets reported stable net interest income during lockdowns, a better outcome than expected, while its capital levels rose and its costs fell by 7%.

The bank had experienced no notable change in loan losses since December, it said in a trading update.

The Irish economy has weathered a third and longest lockdown far better than the first last year with firms adapting and customers shopping online or via delivery services with most shops and all hospitality outlets shut since late December.

The government on Thursday announced that all shops would reopen next month with restaurants, bars and hotels following with limited capacity in early June.

Ireland’s banks responded to the first lockdown by offering customers loan breaks of up to six months. Bank of Ireland said of the 100,000 payment breaks it extended, just 4% remained outstanding at the end of March.

Almost all customers no longer on payment breaks returned to pre-COVID-19 terms with further forbearance measures approved for 4% of those who were unable to, it added.

Davy Stockbrokers said it will likely upgrade its full year profit before tax forecast for the bank by around 10% after the bank’s strong first-quarter income performance.