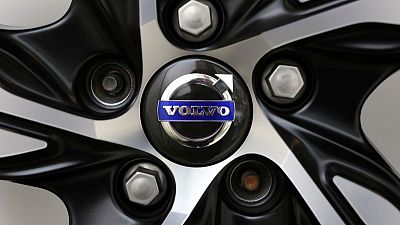 LONDON (Reuters) – Daimler AG’s truck unit and Volvo AB said on Thursday they will start making hydrogen fuel cells in Europe in 2025 via a joint venture, and called for EU policies to help make the zero-emission technology commercially viable.

The rival German and Swedish makers of large freight-hauling trucks formed their joint venture, cellcentric, in March. They said they would provide more details on large-scale fuel production in 2022, but that cellcentric was already scaling up prototype output.

“Partnerships like cellcentric are vital to our commitment to decarbonizing road transport,” Volvo Chief Executive Martin Lundstedt said in a statement.

Aside from the fuel-cell joint venture, the two companies remain competitors. Both hope to test fuel-cell trucks in about three years and start mass producing trucks in the second half of this decade.

The European Union has been pushing tighter emission standards, fueling a boom in zero-emission electric cars.

But as batteries in electric vehicles are very heavy, hydrogen fuel cells are seen as a more viable zero-emission power systems for long-haul freight in the future.

The two truck makers called for the construction of around 300 hydrogen refueling stations suitable for heavy-duty vehicles in Europe by 2025 and around 1,000 stations by 2030.

Earlier this year, carmaker Stellantis said it will begin deliveries in Europe of its first medium-sized vans powered by hydrogen fuel cells by the end of 2021.

Stellantis noted at the time that Germany currently has 90 hydrogen stations, and France just 25 – a tiny fraction of the thousands of petrol stations available for fossil-fuel vehicles today.

As zero-emission trucks are significantly more expensive than fossil-fuel models, Daimler and Volvo said a “policy framework is needed to ensure demand and affordability.”

The two companies said policies should include subsidies for “CO2-neutral technologies and a taxation system based on carbon and energy content.”