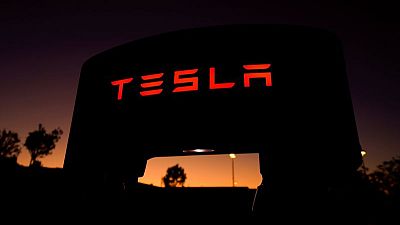 (Reuters) – Cathie Wood’s flagship Ark Innovation fund has allowed its stake in Tesla Inc, its largest holding, to slip below 10% this week for the first time in over a month.

Tesla made up 9.7% of the Ark Innovation ETF as of Thursday, down from 10.9% a month ago, with a net sale of about 252,000 shares over that period, according to portfolio listings on the website of fund manager Ark Invest. The fund’s remaining Tesla stake is worth $2.4 billion.

The recent, modest reduction of the Ark Innovation ETF’s Tesla stake comes after Ark Invest in March predicted that Tesla’s stock would reach $3,000 by 2025.

Popular among retail investors after surging over 100% in the past 12 months, the ARK Innovation ETF’s assets under management have ballooned to $24 billion from under $2 billion at the end of 2019, according to Refinitiv data.

Ark Invest also owns Tesla shares in other ETFs, and it is the electric car maker’s 19th largest shareholder, according to Refinitiv.

Tesla’s shares have receded from record highs in 2021 after jumping more than eight-fold last year. The stock was down 3% at $673 on Thursday and it has dipped about 8% since Monday, when Tesla’s quarterly report failed to impress Wall Street.

However, Tesla’s stock has increased 12% from a month ago, outperforming the Ark Innovation ETF’s 10% gain over the same period, as the fund whittled down its stake in Tesla.

Ark Invest regularly adjusts its holdings, in part responding to investors adding and withdrawing cash from its funds.

The Ark Innovation ETF has accumulated a stake in Coinbase Global Inc now worth about $500 million, equivalent to about 2% of the fund’s portfolio, following the cryptocurrency exchange’s direct listing on April 14.