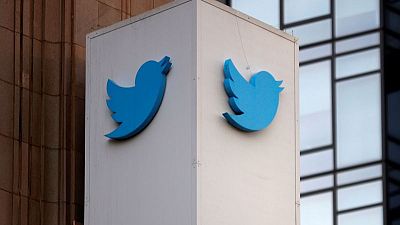 By Elizabeth Culliford and Sheila Dang

(Reuters) – Twitter Inc shares sank 9% in postmarket trading on Thursday as it offered tepid revenue guidance for the second quarter, warned of rising costs and expenses and said user growth could slow as the boost seen during the coronavirus pandemic fizzles.

It said it expected second quarter revenue between $980 million and $1.08 billion, lower than Wall Street estimates of $1.06 billion on average, according to IBES data from Refinitiv. It also said stock based compensation for new hires would be more than expected this year.

Twitter says it wants to reset after years of product stagnation, announcing in February bold goals to expand its user base, speed up new features for users, and double its revenue by 2023.

“The explosive growth that Twitter experienced during the pandemic is slowing rather rapidly in the aftermath of an eventful 2020 in which the microblogging site benefited immensely from the U.S. elections and a pandemic-driven surge,” said Haris Anwar, senior analyst at Investing.com.

Google and Facebook, the top two largest digital advertising platforms, both blew past revenue expectations in their first quarters. Advertisers consider both to have more ad formats and better ad targeting capabilities than Twitter.

The San Francisco-based company repeated its warning that growth of its monetizable daily active users (mDAU) – its term for daily users who can view ads – could reach “low double digits” in the next quarters, likely hitting a low point in Q2.

The company said in a letter to shareholders it was too early to understand the full impact of Apple Inc’s privacy policy change which began rolling out on Monday, but said its integration with a new ad measurement tool from Apple has increased the number of iOS devices it can target certain types of ads to by 30%.

Twitter pledged in February a goal to double its annual revenue to $7.5 billion in 2023 from $3.7 billion in 2020. Responding to criticism that was summed up by CEO Jack Dorsey this year as “we’re slow, we’re not innovative, and we’re not trusted,” the company has recently snapped up newsletter platform Revue and podcast company Breaker and teased a litany of new products.

The company is also testing a live audio feature “Spaces” to compete with Clubhouse and has teased new ways for creators to make money on the site, from tipping to “super follows” where fans can pay for exclusive content.

Twitter said it expected total revenue to grow faster than expenses this year, assuming that the coronavirus is less of a factor and that it sees “modest impact” from Apple’s changes.

But it said in its outlook that stock-based compensation expenses for this year will amount to $600 million, up from its previous guidance of between $525 million to $575 million, as the company ramps up hiring. It forecast capital expenditures to be $900 million and $950 million for the full year.

Twitter said it expects headcount, as well as total costs and expenses, to increase at least 25% in 2021 on a year-over-year basis.