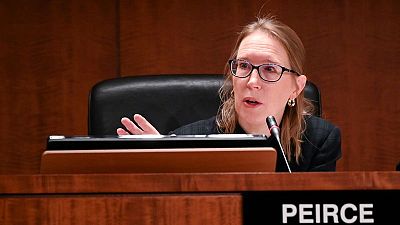 LONDON (Reuters) – China’s planned digital yuan will not dethrone the dollar, a top Securities and Exchange Commission official said on Thursday, citing the growth of so-called stablecoins backed by the greenback.

The world’s biggest central banks, including the People’s Bank of China and U.S. Federal Reserve, are stepping up work on issuing digital cash, eyeing improvements to payment systems and looking to pre-empt the rise of cryptocurrencies.

The PBOC’s work on a digital yuan – part of a push to internationalise the currency and reduced its – is far ahead of similar initiatives in other major economies.

That has led some analysts to question if the faster pace from the globe’s second largest economy could lead the yuan to gain dominance over the dollar, which remains the world’s dominant reserve currency.

Yet Hester Peirce, a Republican commissioner at the SEC, said the rise of stablecoins – privately issued cryptocurrencies often backed by the dollar – would maintain the U.S. currency’s status.

“Even in 2021, there’s been a tremendous growth in stablecoins – these are essentially private digital dollars,” she said. “That, effectively, may be our answer to the Chinese CBDC (central bank digital currency). It may be just private stablecoins.”

“If they’re dollar-backed then I think that the dollar will still be quite relevant,” said Peirce during a digital currency event.

Federal Reserve Chair Jerome Powell said on Wednesday China’s digital yuan plans would not push the Fed to rush its own digital dollar plans, emphasising that its primary goal was not speed to market but to avoid any misstep in digitising the dollar.

Stablecoins are a fraction of the size of bitcoin, the largest cryptocurrency.

The biggest, Tether, has a market capitalisation of about $51 billion, compared to bitcoin’s $1 trillion. Like bitcoin, it is still little used in commerce.