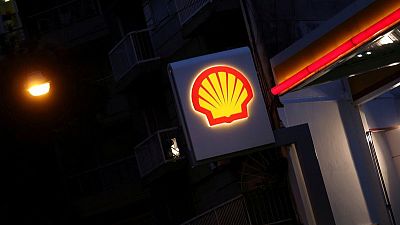 LONDON (Reuters) -Royal Dutch Shell’s profits leapt to $3.23 billion in the first three months of the year and the energy company raised its dividend as planned but warned that the outlook remained uncertain due to the coronavirus pandemic.

Shell’s adjusted earnings were above an average analyst forecast of $3.125 billion and also ahead of earnings of $2.9 billion last year, boosted by assets sales as well as higher oil and liquefied natural gas (LNG) prices, it said on Thursday.

Sales of oil and gas assets in countries including Nigeria, Canada and Egypt added $1.4 billion to first-quarter profits.

Shell’s London-listed shares were up 1.2% at 0736 GMT, outperforming a 1% gain for the broader European energy index.

“The quarter proves without doubt that Shell’s earnings power is intact,” Bernstein analyst Oswald Clint said in a note.

Shell said its fuel sales fell 13% in the first quarter due to further lockdown measures and the impact of a Texas storm in February, saying there was still “significant uncertainty” over the outlook for demand in the second quarter.

The Anglo-Dutch company raised its dividend by 4% as planned, the second increase since its slashed its payout by two-thirds at the start of last year due to the coronavirus pandemic.

Shell’s cash flow from operations, a key performance metric, rose to $8.3 billion from $6.3 billion, helping to reduce its debt to $71.3 billion.

Shell wants to get its net debt below $65 billion before starting to repurchase shares, part of its strategy to shift to low-carbon energy in the coming decades.

Norway’s Equinor also raised its dividend and posted a rise in first-quarter profits on Thursday.

Shell’s oil and gas trading operations, the world’s largest, did not boost revenue significantly in the quarter, unlike rival BP which reported “exceptional” revenue on Tuesday from its natural gas trading business.

Shell said its LNG trading was significantly below average in the quarter as a result of credit provisions following the storm in Texas, which triggered a massive state power failure and left millions of people without light, heat and water.

Shell’s fuel sales fell in the first quarter to 4.16 million barrels per day (bpd) but were expected to rise to an average of 4.5 million bpd in the second quarter.

Oil and gas production at Shell’s upstream operations fell 9% from a year ago to 2.46 million barrels of oil equivalent per day (boed) due to maintenance and disposals.

Output was forecast to decline again to 2.25 million boed in the second quarter due to lower seasonal gas demand and further asset sales.