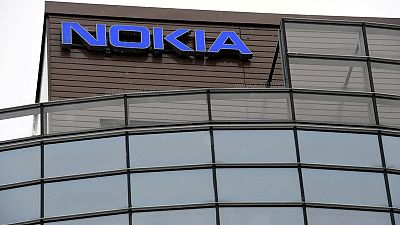 STOCKHOLM (Reuters) -Finnish telecom network equipment maker Nokia on Thursday showed how its new strategy was driving growth in sales of network and 5G equipment, helping to boost first-quarter revenue and profit and sending its shares up 14%.

Nokia and Swedish rival Ericsson have been gaining more customers as telecom operators start rolling out 5G networks and China’s Huawei faces curbs from a growing number of governments over security concerns.

“This year we are seeing great demand in 5G and also in what we call network infrastructure which is basically fiber connections to homes and offices,” Chief Executive Pekka Lundmark said in an interview.

After taking the top job last year, Lundmark has streamlined Nokia’s operation, cut jobs, and made changes to recover from product missteps under the company’s previous management that hurt its 5G ambitions and weighed on its shares.

“We expect our typical quarterly earnings seasonality to be less pronounced in 2021,” Lundmark said.

The demand for infrastructure, driven by the pandemic, is now spread out through the year, easing seasonality, which earlier resulted in outsized growth in the fourth quarter.

Quarterly revenue rose 3% to 5.08 billion euros ($6.16 billion), beating a consensus figure of 4.72 billion, , according to IBES data from Refinitiv.

“These are a solid set of results and a good start to the year for Nokia,” said Richard Webb, an analyst at CCS Insight. “In particular the operating margin of 11% looks healthy and shows that the restructuring is having some positive impact.”

Nokia maintained its full-year net sales forecast of between 20.6 billion euros to 21.8 billion euros, largely in line with expectations.