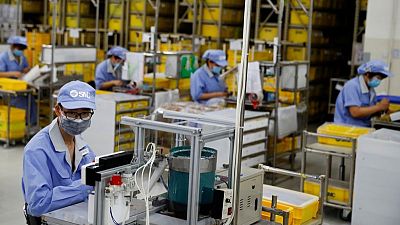 BEIJING (Reuters) – China’s factory activity was expected to have grown at a slightly slower pace in April while maintaining momentum as the world’s second-largest economy continues its recovery, a Reuters poll showed on Thursday.

The official manufacturing Purchasing Managers’ Index (PMI) released by the National Bureau of Statistics (NBS), is expected to edge down to 51.7 for April from 51.9 in March, according to the median forecast of 30 economists polled by Reuters.

A reading above 50 indicates an expansion in activity on a monthly basis.

Profits at China’s industrial firms nearly doubled in March from a year ago, as demand for raw materials surged, helping upstream industries, official data showed on Tuesday. Higher raw materials costs are putting pressure on some enterprises, however, according to the NBS.

China’s exports rose sharply in March but many analysts believe growth could lose some momentum as industrial production recovers from pandemic-related disruptions in other countries.

Beijing has successfully curbed the domestic transmission of the COVID-19 virus, leading to quarantine restrictions and testing requirements being scaled back as life returns to normal.

Economic growth quickened sharply in the first quarter to 18.3%, driven by stronger demand at home and abroad and supported by a low comparison base the previous year due to COVID-19 disruptions.

China has set an annual economic growth target at above 6% this year, which is lower than the analyst consensus but makes allowances for uncertainties. Premier Li Keqiang has warned against any sharp turn in policymaking.

The official manufacturing PMI, which largely focuses on big and state-owned firms, and its sister survey on services, will both be released on Friday.

The private Caixin manufacturing PMI, which focuses on smaller and private firms, will be published on the same day. Analysts polled by Reuters expect it to rise slightly to 50.8 from 50.6 in March.