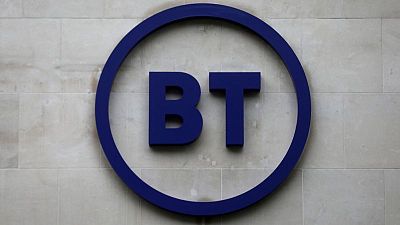 LONDON (Reuters) -Britain’s BT Group said on Thursday it was in talks to sell a stake in its sports business BT Sport, confirming a media report that companies such as Amazon, Walt Disney Co and sport streaming group DAZN had shown interest.

Britain’s biggest broadband and mobile operator has spent billions of pounds on Premier League and Champions League rights since it took on the dominant sports broadcaster Sky to stem its customer losses, but its focus has since turned to building its fibre network.

“Further to media reports, BT can confirm that early discussions are being held with a number of select strategic partners, to explore ways to generate investment, strengthen our sports business, and help take it to the next stage in its growth,” BT said.

“The discussions are confidential and may or may not lead to an outcome.”

The report by the Telegraph, citing City sources, said a British broadcaster was also involved in the discussions and potentially leading the bidding.

Analysts say BT’s move into sport helped to attract customers to its broadband service in the early years but sports subscriptions had been impacted by COVID-19, both for consumers and for pubs and clubs that were closed for much of the year.

BT said in October that reduced BT Sport income was a major contributor to an 8% drop in overall first-half revenue.

The battle between BT and Sky, which is now owned by Comcast, drove Premier League rights to record levels, with the two shelling out a combined 5.14 billion pounds ($7.17 billion) in 2015 for three years of coverage.

The rivals struck a deal to carry each others sports channels from 2019, helping end a period of rampant inflation.

The Premier League would in normal circumstances have auctioned the next packages of domestic rights by now, but the COVID-19 pandemic has disrupted the timetable.

The League is seeking government approval to roll over current deals, which also included Amazon.

BT, under the leadership of Philip Jansen, is now focused on an ambitious plan to roll out fibre broadband (FTTP) to 20 million homes and businesses this decade, requiring 12 billion pounds of investment.

The company suspended its dividend last year to bolster its balance sheet to weather the pandemic, a “tough decision” that Jansen said was necessary to allocate capital to enhance value.

Analysts at Jefferies said since BT Sport launched in 2013, BT had struggled to define its value contribution.

They said it had helped stem a loss of broadband customers to Sky in its early years, but it was no longer needed as BT’s consumer product improved.

“Stepping back from sport signals BT’s confidence in its core consumer offer, focused on FTTP,” they said.

Shares in BT were trading up 2% in early deals at 163 pence.