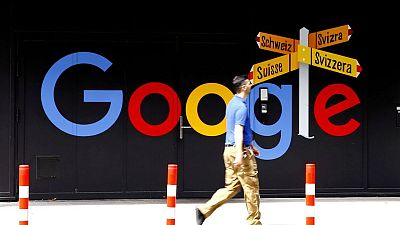 By Paresh Dave and Subrat Patnaik

(Reuters) -Google parent Alphabet Inc on Tuesday beat quarterly revenue estimates and announced a $50 billion share buyback as the recovering economy and surging use of online services combined to accelerate its advertising and cloud businesses.

The results are the first sign that Google services may hold on to gains in usage brought on by lockdowns and other pandemic restrictions that forced people to shop and communicate online over the last year.

Google ad sales surged 32% in the first quarter compared with a year ago, above expectations of analysts tracked by Refinitiv. Cloud sales increased 45.7%, in line with estimates.

About 17% of people in the United States, Alphabet’s top region by revenue, were fully vaccinated against COVID-19 by the end of the first quarter. Activities including in-person dining resumed in big cities in March, and security screenings at U.S. airports had their busiest day in a year.

The changes coincided with Alphabet’s overall sales rising 34% to $55.3 billion, above analysts’ estimate of $51.7 billion, or 26% growth over last year’s first quarter, when ad sales fell significantly in the final couple of weeks.

Alphabet’s quarterly profit rose 162% to $17.9 billion, or $26.29 per share, beating estimates of $15.88 per share. Earnings benefited from unrealized gains from venture capital investments and slower depreciation of some data center equipment.

The company’s operating margin rose to 30% for the first time since incorporating as Alphabet in 2015 even as its costs began to pick up again. Alphabet in 2020 suffered its slowest sales growth in 11 years but posted record profit and upped its cash hoard by $17 billion after slowing hiring and construction.

It was not immediately clear which industries powered Google’s growth in ad and cloud sales.

Increased ad buying by travel and entertainment companies would be a positive sign as hotel booking services and movie studios are among Google’s biggest spenders.

Google’s ad business, the global market leader as measured in sales, accounted for 81% of the quarterly revenue compared with 82% a year ago.

The operating loss for Google Cloud, a distant rival to the cloud businesses of Amazon.com Inc and Microsoft Corp, narrowed 44% to $974 million in the first quarter.

Privacy and antitrust lawsuits against Google that could result in changes to its ad operations have remained a concern for investors, according to analysts. But resolution remains distant, with one key trial not expected until 2023.

Discussions about changing U.S. and European laws to impose new oversight on Google, Facebook Inc and other companies, especially regarding privacy and artificial intelligence, have lagged as legislators have been distracted by the pandemic.

Shares of Facebook, which had been up 62% during the last year entering Tuesday, rose 1.7% after hours. Shares of Amazon, another big competitor in advertising, rose 0.2% after Alphabet’s results and had been up 44% over the last year.

(Reporting by Subrat Patnaik in Bengaluru and Paresh Dave in Oakland, Calif.Editing by Devika Syamnath and Matthew Lewis)