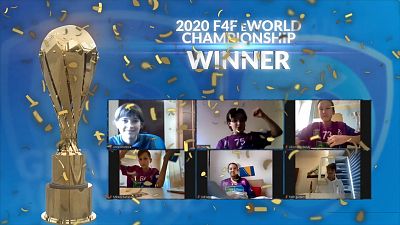 Over 1 million participants have taken part in online events during the eighth season of Gazprom International Children’s Social Programme Football for Friendship.

Because of the Covid-19 pandemic, the project ventured into the digital world for the latest season that’s now come to an end, giving children from all over the globe the opportunity to connect and share their experiences whilst promoting essential human values such as peace, friendship and equality.

A two and a half hour master class with live video feeds from all over the world included a special guest appearance from Brazil legend and Football for Friendship ambassador, Roberto Carlos. It was enough to seal the deal with children from over 100 countries tuning in to perfect their skills.

The season culminated with young participants locking horns in the eWorld Championship. Unable to unite the children on a football pitch, Football for Friendship developed a phone app to enable players from different countries to form teams. It included a variety of special features to add to the excitement.

“You can personalize or customize your own players so you can give them hair in the colours of your country’s flag if you want to,” says Football for Friendship Ambassador Rich Williams. “And the other thing that’s great about it is that you’ve got superpowers. You can dash faster than the rest of the players or if you’re in goal and there’s a bit of danger heading your way, there is a superpower where you can put up a brick wall that goes in the goal which stops the other team from scoring. So it’s a really great way for kids all across the world to have a bit of fun.”

With a glamorous studio, a vibrant host, special guests and colourful mascots, the draw set the tone for a tournament which ultimately lived up to its billing.

Hundreds of participants were selected to take part in the event, enabling them to form new friendships and share experiences in spite of the miles separating them.

“I have met lots of friends and during this pandemic, these hard times, we were very close, we were talking together, we were having fun,” says Football for Friendship coach Mohamed Ilan Imran.

“For me, it means an opportunity to gain a new experience and to share my views, not only as a player but also as a person,” adds Football for Friendship player Doro Yusupov.

“I met new friends… I will miss them,” says fellow player Alinur Gabidenuly.

The competition on the pitch was fierce, and although the trophy was eventually lifted by the mighty Granular Salamander team, the main prize was shared by all as friendships were formed and cultures united throughout the tournament.

Marry up online and offline worlds

In the midst of the pandemic, Football for Friendship was able to adapt and give its young players and journalists the opportunity to share their experiences. The digital route proved successful and it could become a parallel driving force as the project has shown it can grow on or off the pitch.

“I guess it’s a case of trying to marry up both worlds and get as many people as possible involved,” says Williams. “And like everything with the pandemic this year, if some good stuff can come out of it, at the other end, that may be more kids will be able to be involved, then that’s the kind of thing I think we should be looking at to try and move into 2021 but hopefully it will just go from strength to strength.”