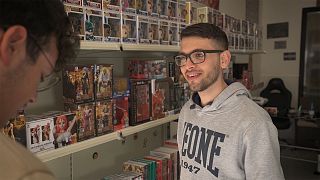 In Europe, young people are finding it increasingly difficult to get a decent, permanent job despite being the most educated generation ever. There are a number of EU initiatives underway to open up the job market to the younger generation.

Youth Guarantee aims to give every person under the age of 25 an offer of employment, further education or a traineeship within four months of becoming unemployed or leaving education.

So far, 14 million people have taken up the offer. But there are still serious concerns about the number of young people without a job especially in the south of the EU.

At 27.1%, Italy has one of the EU's highest youth unemployment rates and the government hopes the Youth Guarantee initiative will help to solve the problem. But the scheme has been criticised for concentrating on internships and not full-time employment.

Italy's Labour Minister Nunzia Catalfo says there are ways the Garanzia Giovani scheme could be improved by introducing additional measures focusing on better training. But attention needs to be paid to other aspects of the youth unemployment problem.

"We also have to strengthen social services to take care of these young people and help them through their education and training," she explains. "No education means being isolated from the labour market and this eventually leads to people being inactive or unemployed."

In the southern regions of Italy, almost half of young people aged between 15 and 24 years-old are without a job. In Calabria, Pierdomenico Sesto decided to tackle the problem by opening his own shop with help from the Entrepreneurship programme Yes I Start Up supported by the Youth Guarantee initiative.

"I decided to become an entrepreneur because I have worked a lot over the last few years and I've been underpaid and exploited, so I decided to start my own business," he says. "I heard about Yes I Start Up when I had almost lost hope, because I had already tried to get a loan from a lot of banks."

Passionate about comics, Pierdomenico was able to take advantage of a business training scheme. He then asked for a €35,000 loan that allowed him to open his own shop.

"I got the funds from Invitalia, the microcredit agency and from the Calabria region," he explains. "Let's say the Yes I Start-Up project hasn't saved my life, but it has changed it a little."

Through the Youth Guarantee initiative, 300 young people in Calabria put forward a project and 60% of them were given a loan. In Italy, only 20% of young people not in employment or education are registered in the scheme.

Annarita Lazzarini is the Italian Youth Guarantee Manager for Calabria Region. She says employment centre do not always have the information needed for young people to participate in the initiative which is why Calabria and other Italian regions have turned to the private sector for more help.

In Rome, Cristina Nicosia, a digital marketing manager, was tired of only being offered short term contracts. So three years ago, she applied to the programme Growing in Digital, a partnership between Google and the Italian Chamber of Commerce.

"I was given the opportunity to attend a free web marketing course and then I was lucky enough to use the skills I had acquired for a six-month internship in a company," she says. "I was able to get to know an industry I knew nothing about - Made in Italy jewellery. I was also given a number of responsibilities and the internship went so well that at the end I was given a permanent contract. The project Crescere in Digitale was crucial for me because it helped to jumpstart my professional life and my career."

About half of those young Italians who complete a programme financed by Youth Guarantee are now in employment. But there is still a lot to do, Pierdomenico wants the government to provide more information on work opportunities.

Labour Minister Nunzia Catalfo says the government is working on improving access to this information.

We started out with 8,000 operators but the plan is to have around 20,000 by 2021 so we will more than double that number adding 11,600 more operators - highly skilled people whose job is to offer assistance people looking for a job, " she explains. "Of course we are also planning to make it easier to access information and make some digital platforms available so that the process of finding a job will be faster and more immediate - not only for young people but for every unemployed person."

She says the government is successfully tackling the unemployment problem.

According to the National Institute for Statistics, employment rates in Italy have increased and there are now 70,000 more long-term contracts thanks to a measure we introduced last year called Decreto dignità aimed at increasing the number of stable and long-term contracts as opposed to short-term contracts," she says. "Thanks to this measure we were able to create more stability in the labour market and the data proves we have been successful."

How to make the most of your work experience abroad