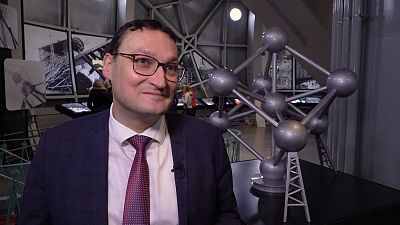 The European Union has identified hydrogen as one of six key strategic areas where major action and investment are needed.

But in spite of its massive potential, building the infrastructure for a hydrogen-based economy remains a challenge.

The Fuel Cells and Hydrogen Joint Undertaking is a collaboration between the European Commission, industry and research organisations.

Its aim is to speed up the process of bringing hydrogen technology to the market and achieving a carbon-clean energy system.

By 2030 I'm sure we will be in another world and hydrogen will be a big part of that.

Business Planet: "What is the Fuel Cells and Hydrogen Joint Undertaking exactly? And how are you helping to lead the hydrogen revolution?"

Bart Biebuyck: “Well the Fuel Cells and Hydrogen Joint Undertaking is a public private partnership working together with industry, research, and academia but also with the European Commission, in terms of the Transport Energy and the Research Directorate. And together we are managing 263 projects so far, for two billion euros, and now we are looking to the future and there we really need to scale up. And for doing that we will mainly be focusing on manufacturing technologies, but also we need to look into heavy duty, so we have to look at for example trucks, trains, aviation. It's a very new area and we know that hydrogen has the potential, so we need to explore that.”

Business Planet: "Fuel cells, hydrogen technology. Is this the route to cleaner air in our cities?"

Bart Biebuyck: “Absolutely, because first of all this technology does not emit any emissions. Only water comes out. And so this technology can be used in transport, as I already explained, but also it helps to heat up your houses, the industries are using today already a lot of hydrogen and that hydrogen today unfortunately is still from fossil fuel base, from gas. But in the future, we are actually now working on it, to green that hydrogen, and thanks to the innovations that we have done in the electrolytes, I mean we have 31 projects, funded for more or less 114 million euro, we have driven down the cost enormously, and at the same time we increased the capacity from kilowatt to megawatt scale now, so we will be able in very near future to produce green hydrogen at the same cost of fossil fuel based hydrogen today.”

Business Planet: "What’s being done to scale things up, to build the necessary infrastructure, so hydrogen can become a reality?"

Bart Biebuyck: "During the last 12 years we really have been developing this technology and now since two, three years we have been demonstrating in the streets, in the field, that this technology works. So the next step now is logically we have to scale up, and what we will see in the next five years we will see more of these demonstration projects come out, bigger demonstrations, we really see that mass production will start from 2025 onwards. And at the same time also, we will have to start building our infrastructure for a big distribution of hydrogen, like we can use the natural gas pipelines for transporting hydrogen, so that will have to be transformed and you will see that in the next 10 years, this will happen, but by 2030 I'm sure we will be in another world and hydrogen will be a big part of that."