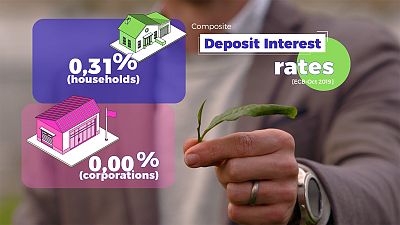 The European Central Bank has been leading the push to stimulate Europe’s economy, keeping the cost of borrowing for local businesses and households low. But some now say its financial toolkit is almost empty.

This is important for Small and Medium Enterprises, which represent more than 99 per cent of all European non-financial companies. They depend on banks for 70 per cent of their external financing.

The situation has improved as a result of the record low interest rates on loans, and higher bank loan availability thanks to the ECB’s support.

The bond-buying programme of the ECB, launched in 2015 to support Europe’s economy, is helping SMEs get cheaper loans.

One company to benefit is Special Plant, a nursery in the south of the Netherlands that employs 25 people.

The company recently developed a local tea plant. And business is blooming, thanks to low interest rates.

Tea By Me chief executive Johan Jansen told Real Economy: “For the plant business to start the bank loan was really needed. It was a big investment in total, 1.8 million (euros). So we needed a big amount of money with low interest … It is essential to have cheap money because otherwise we cannot grow.”

But the record low cost of borrowing is having another impact, too, with property prices in certain European cities pushed to dangerously high levels. One of them is Amsterdam.

This year, households had an outstanding mortgage debt with Dutch banks equalling 91% of the total country’s economy - compared to 55% on average in Europe.

The Dutch central bank considers this to be one of the biggest threats to financial stability in the Netherlands.

Bas Jacobs, Professor of Economics at the Erasmus School of Economics, told Real Economy: “The first risk is that the housing market will keep on rising and housing prices might feature bubbles. The second risk is that low interest rates do damage to the liabilities of the pension funds and this is of course very bad for the Dutch economy. Low interest rates are a signal that the government should actually invest more especially in education and research and energy transition."

With the economy stuck at low levels of growth, the ECB is calling for countries with budget surpluses, such as the Netherlands, to invest more in its economy to stimulate growth in Europe.

Not everyone agrees with that. The German and Dutch finance ministers insist their governments are already doing a lot to boost domestic demand.

Laurence Boone, the chief economist of the OECD, is arguing for a greater focus on fiscal policy.

She told Real Economy: “The ECB has been doing a lot since the beginning of the crisis but it has been the only game in town for too long and that cannot last forever which is why we are arguing for fiscal policy to step in and help ECB to reach its objective.

“There are quite a few countries with fiscal space in the Eurozone. There are obviously the Netherlands, Germany and a lot of Nordic countries but everybody has to invest in the technology, digital, energy of the 21st century. Take the Netherlands. They have announced in their last budget that they would increase their budget by 1% of GDP but even more importantly they are setting up a fund of 50 billion which we think will be partly financed by borrowing to actually fund the energy transition and that's what actually we want countries to do.”