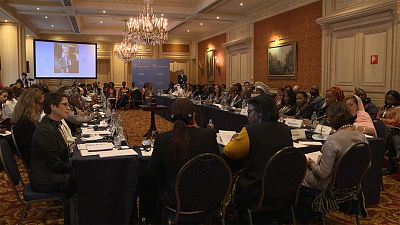 The 2019 African Women's Forum took place in Brussels, drawing together government leaders, policymakers, business leaders and NGO's from Africa and around the world to exchange ideas and work together to create real change for women on the African continent.

The event is organised by the Swiss Crans Montana Forum, which has been running for more than 30 years.

A new role for women in agriculture in Africa

“We are encouraging women to make agriculture a business, not a subsistence agriculture," explains Commissioner for Rural Economy and Agriculture, African Union, Josefa Leonel Correia Sacko.

"We want to achieve, shift the paradigm and give a chance to women to modernise agriculture so that she can increase productivity and also the income for the households.”

Agriculture is the main source of jobs in Africa. Yet with women contributing nearly 80% of the food supply, they only have access to 15% of the land.

In October, the African Union unveiled a statue dubbed "Retiring the Hoe to the Museum’’, in the Burkina Faso town of Bobo Dioulasso to symbolically mark their agenda of promoting agriculture mechanization among women to improve food production.

One innovative solution being discussed at the forum is Vertical Farming. It’s a method that uses no soil, 95% less water than traditional farming, and isn’t affected by the weather.

“Vertical Farming does not need land. All it needs is space. If one woman or two can get space from the community they can build their own Vertical Farm, meaning that they can be independent thereafter for their families and for themselves," explains President of the African Association for Vertical Farming, Josephine Favre.

"If you are able to give an African woman that opportunity, to feed her family, then use whatever is surplus to make an enterprise, I think that is spot on.”

The World Bank estimates that agribusiness in Sub-Saharan Africa will be worth 1 trillion US dollars (€904 billion) by the year 2030.

More than a quarter of women in Sub-Saharan Africa are already entrepreneurs - the highest rate globally.

But African women face a $20 billion dollar (€18.06 billion) financing gap, meaning they are hugely disadvantaged in growing their businesses.

Former London-based lawyer Grace Camara is harnessing the power of the African diaspora to combat this.

She set up the Remitfund, an investment fund where Africans sending money back home contribute a small percentage.

The money is then invested in entrepreneurs with social enterprise businesses in Africa from agriculture to tech and fashion.

"African fashion is like the cool thing now, a lot of it is featured on the catwalk so for me, this was really an opportunity to look at how we could support those fashion designers to bring their manufacturing base back to the continent," says Camara.

" With millions of followers on Instagram and selling to celebrities around the world, we could potentially create between 50 to 100 jobs. Our ethos is diaspora driven development and we’re here to help the diaspora make a difference on the continent.”

Networking and a strengthening of ties between women from different countries is a key element of the forum.

“I think that if we really want to help African women, then it’s not just about going to Africa to help them, although that’s important. We need to aid them in making international connections, to meet people, exchange ideas and grow their network,” says President of the Crans Montana Forum, Jean-Paul Carteron.

As more African women are empowered economically the conclusion of the forum is clear. They’ll also become powerful players in the fight against hunger, malnutrition and food insecurity.