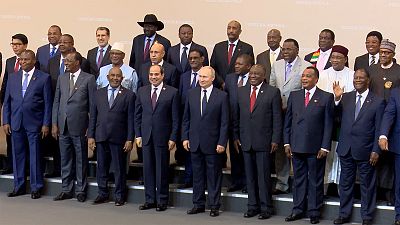 Forty-eight hours within which to re-define strategic relations between the African continent and Russia. That was the ambitious objective of the Russia-Africa Summit held in Sochi on 23 and 24 October.

The very first edition was co-chaired by Russian President Vladimir Putin and his Egyptian counterpart, President Abdel Fattah Al-sissi, who doubles as the current president of the African Union.

Vladimir Putin reaffirmed the need to intensify trade relations between Russia and Africa, addressing over 40 African heads of state gathered together with thousands of participants.

Putin said, "Over the past 5 years, trade between Russia and African countries has almost doubled to more than $20 billion. Ladies and gentlemen, that is too small. Of this $20 billion, $7.7 billion represents our trade with Egypt, which is almost 40%, while in Africa there are many very promising partners with great growth potential! So of course that's not enough."

Moscow carved a prominent niche, by supporting the struggles for decolonization. Especially in Mali, a country that has been a friend for nearly 60 years, recalled President Ibrahim Boubacar Keïta.

"As early as 1961, Russia had given us the proposal of wishing to cooperate with us, and we also owe this country our first industrial units, those that made it possible to create state-owned companies and enterprises in Mali, which marked the seal of economic cooperation between our countries,” said Boubacar.

“And I believe there is a new deal, a new era, by which everything is being rethought... it is, therefore, a new sign of cooperation that is resuming with Russia in all areas and from now on, every three years, we will have a Summit, sometimes in Africa, sometimes here in Russia. Beyond the traditional military, Mali, like other African countries, relies on Russian expertise to develop other sectors," Boubacar added.

Safia Boly, Malian Minister in charge of promoting private investments said, "You know Mali is a logistics hub. We have seven borders with seven different countries, so being a landlocked country, a good infrastructure allows us not only to connect to several countries in the sub-region but also to increase export opportunities for our companies.”

“We have very good mining reserves, we produced 66 tons of gold last year and we know that the possibilities are much greater than that. The third sector is the agriculture industry (agro-industry), where we also have very significant potential and we want to attract many more Russian investors," explained Boly.

If Russia makes significant investments in Africa, the country is not only positioning itself as a savior, but as a win-win business partner...

"It's basically cooperation, fair cooperation between two sides. It gives both of us an opportunity to find new technologies, to share this,” said Sorokin. “I strongly believe that our companies, our track record shows that we do share technology, that we are ready to share culture, we are ready to take culture in from our partners and grow together. Because we are both on the path of growth and that means that we have to cooperate for the benefit of each of these parties," added Sorokin.

In his closing address, Vladimir Putin stressed his commitment to strengthening security and stability on the continent. He also confirmed the need to establish win-win partnerships deals in areas including public health and transport.

From this Summit, Russia clearly is positioning itself as a strategic partner on a continent where, until now, China or the West have been several steps ahead. Moreover, to achieve this, the country hopes to rely on its military expertise, but also place dialogue and reciprocity in perspective.

The meeting of speakers of parliaments kicks off in Nursultan