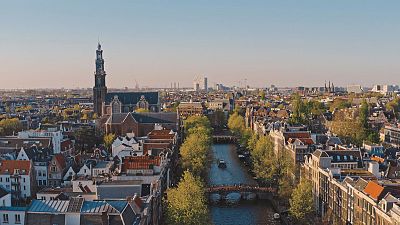 More than 25 million Europeans work in tourism - a sector estimated to contribute around 10 percent of EU GDP. But what happens once the peak summer period ends? For many SMEs operating in Europe's travel industry, accessing new markets is vital for opening up new business opportunities. One market that shows no sign of slowing down any time soon is China. Once travel minnows, in just the space of a few years, the country has become a global powerhouse when it comes to outbound travel.

Getting a better balance

Attracting Chinese tourists outside the peak summer holiday period and to Europe's lesser frequented cities or tourist attractions is seen as one of the best ways to create growth and develop more sustainable tourism.

Dutch multimedia firm Nuformer is a specialist in motion graphics and virtual reality. Last year, the company used its creative technology to produce a giant 3D show in the Chinese city of Xian. Held during the closing ceremony of the EU-China Tourism Year, the performance showcased some of Europe’s less-visited locations.

"Well projection mapping is a technology that enables us to project very large size video footage on an object or an ancient wall like here in Xian, and the video footage that we used for this project showed lesser-known destinations in Europe," says Nuformer CEO Rob Delfgaauw.

One of the key objectives of the EU-China Tourism Year was to promote off the beaten track and out of season locations.

In addition, the year-long campaign sought to build stronger business links and more than 1000 EU companies, including many small and medium-sized enterprises, took part in Business to Business matchmaking events.

Last year saw more overseas visits to Europe than ever before. A part of that rise was down to Chinese tourists. While tourism brings lots of economic benefits, in popular places, like Barcelona, Venice and in Amsterdam, the boom is not universally welcome.

The Dutch city has introduced policies, such as removing the famous "I amsterdam" sign in order to curb numbers outside the city's main art gallery. A ban on tours of the city's red-light district is also due to take effect next year.

Attempting to spread tourists by attracting them to other destinations not only seems to make more sense economically, but it would also appear to benefit those hotspots struggling to cope with large visitor numbers.

"I think it would be very important to try and see if we can inspire Chinese tourists to visit the lesser-known destinations in Europe, especially independent tourists in China, they are looking for unique experiences that they can share online with the friends and relatives in China," says Dr. Dineke Koerts, an expert in Chinese tourism.

Dr. Dineke Koerts, from the Academy for Tourism at Breda University of Applied Sciences in the Netherlands, is an expert in Chinese tourism. Business Planet spoke to her about the growing outbound Chinese tourism market.

What more can be done to encourage Chinese visitors to Europe?

What's the growth potential of this market?

"The growth potential I would say is perhaps beyond imagination if we realise that currently less than 10 percent of the Chinese population, of 1.4 billion more or less, hold passports. So it means, and with the middle class continuing to grow, it means that lots of Chinese tourists will be travelling the world and they have also developed a real appetite for travel."

EU initiatives like the EU-China tourism year - how important are they for boosting tourism from China to Europe?

"I think the EU-China Tourism Year was very important in drawing attention to Europe, and also putting Europe on the map as a suitable destination for off-season travel. The main holidays in China are around October the 1st and January-February, so not the European high summer season. Furthermore, during the EU-China Tourism Year, many business to business matchmaking events were organised, putting European and Chinese tour operators and other tourism providers in touch with each other. If you go to the website of the EU-China Tourism Year there is lots of interesting material available, webinars and other leads, for especially small and medium enterprises to explore the possible market in China."

• For many EU companies operating in the tourism sector, accessing new markets is key to open new business opportunities.

• More than 1,000 EU companies, including many small and medium-sized enterprises (SMEs), benefited from Business-to-Business (B2B) matchmaking events organised thanks to the Tourism Year.