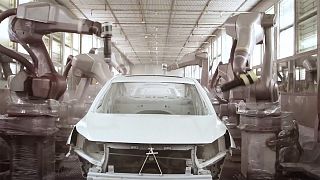 In the latest episode of Focus, we visit Kutaisi – Georgia’s second largest city and an emerging industrial, cultural and educational centre.

In a first for the country (and in the South Caucasus region), the city will soon launch a factory plant for electric cars. A Georgian private company and a Chinese group (the largest electric car manufacturer in the world) will join forces to construct a production factory outside the city.

The project (which is supported by the Georgian government) will include a manufacturing plant. It will be followed by the construction of painting and welding facilities, as well as a factory for solar panels. The first electric cars will be manufactured in Georgia by 2020.

Euronews spoke to Kakha Guledani – from the Board of Directors – at the Georgian industrial holding Aigroup.

“We are investing in projects that protect and respect the environment. These investments are relatively big because of the specificity of the business. It requires a special infrastructure including placing electric charging stations all over the country and solar power receivers. As for employment, during the starting phase, we plan to recruit 300 workers, but many more will join us at the operational phase. This is very important for Kutaisi and for the wider region as well.”

The capacity of the enterprise will be 40,000 electric cars per year, and initially, four electric car models will be manufactured. At least half of them for the domestic market.

Kutaisi will soon become one of the newest cities in the world offering electric car sharing services. Its an announcement that has even Georgian Prime Minister Mamuka Bakhtadze excited.

“This factory will open a new chapter in our economic history. It will help us reform our economy by creating more than 2,000 jobs and - at the same time - will help us to increase our export potential.”

For the government, this project is a part of a larger plan for transforming the country’s economy into a greener economy. It also will also promote the development of the automobile industry in Georgia