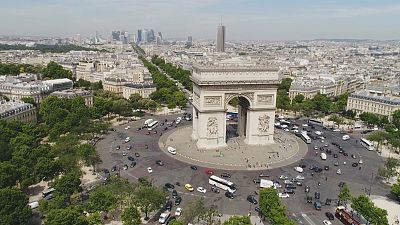 Business Planet travels to Paris to see how one award winning company is making a big difference by turning piles of the city’s food waste into renewable energy.

For many businesses it is nearly always about the bottom line, but what about those socially innovative companies that decide to go beyond just making money, choosing instead to make a wider contribution to society? French firm ‘Love Your Waste’ is one such firm. Working with schools, hospitals, restaurants and food delivery firms in and around Paris, the company collects piles of food waste that end up in the French capital's bins every day.

Explaining what happens to the waste once it is collected, ’Love Your Waste' Co-founder Jérôme Perrin, said: “It (the bio-waste) is sent to be transformed into renewable energy, bio-gas, and organic fertiliser that is non-polluting for local agriculture.”

The company says its ultimate goal is to promote a circular economy, by minimising what resources are wasted, putting what's left over to use.

Having a wider impact

In addition to collecting food waste and converting it into renewable energy and fertiliser, 'Love Your Waste' also advises many of its clients on how to reduce the overall waste they produce, in an effort to cut down on the total amount of rubbish that gets thrown away in the first place.

Food delivery service Mr. Matin, believes working with 'Love Your Waste' has had a wider impact on its business, helping it to better serve the community.

“Love Your Waste is great for two reasons, it gives us a technical solution, which allows us to get rid of half a tonne of bio-waste every week. And it also gives more meaning to our activity, raising awareness among our teams, who as a result can work with a smile. I think it's great!" said Mr.Matin Co-founder François Goursaud.

Despite the best efforts of companies like 'Love Your Waste', much of the bio-waste we produce still ends up in the bin. Most of that is either buried or incinerated, creating pollution when it could be creating renewable energy instead.

In the EU alone, around 100 million tonnes of food is wasted each year, while globally it is estimated about one-third of all food produced goes to waste.

The European Commission says dramatically reducing this huge food rubbish pile is an integral part of its plan to stimulate Europe’s transition towards a circular economy, a plan which seeks to foster sustainable growth, boost global competitiveness and also generate new jobs. Both the EU and all its member-states have committed to meeting the UN's Sustainable Development Goal 12.3 to halve per capita food waste at the retail and consumer level by 2030.

But 'Love Your Waste' doesn’t just strive to have a clean environmental conscious. It also makes a point of hiring people who have been long-term unemployed. In 2016, it was recognised for this, winning the impact prize at the European Competition for Social Innovation.

"I am not a politician, I am a citizen. 'Love Your Waste' is part of the community and it’s determined to help tackle two of the main structural problems which face any society; unemployment and the environment, Perrin says, adding: "In terms of unemployment we try to do something about one of the most difficult aspects, and that is being out of work on a long-term basis."

Organised annually by the European Commission, this year, the European Competition for Social Innovation will focus on ways to reduce plastic waste - the winners are due to be announced in the Autumn.

A social innovation expert, Taoufik Vallipuram is an active member of the international network Ouishare. It works to help cities adapt to technological change. Business Planet spoke to him about the concept of social innovation and its future role.

What is social innovation? Is it a new way of doing business?

"Social innovation focuses on social and environmental issues that have not been addressed yet or that cannot be solved by an industrial way of thinking. So it's very different. Social innovation tries to solve a social issue."

Are socially innovative companies the future?

What is the European Social Innovation Competition?