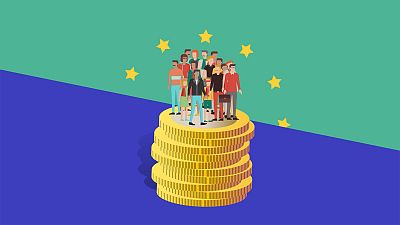 This is an issue in Europe and around the world. Many people at the Brussels Economic Forum believed this contributes to the rise of the far-right.

In the EU the top 20% of the population with the highest national net disposable incomes accounted for at least one third of total income.

By contrast, the bottom 20% of the population with the lowest incomes accounted for less than one tenth of all income in 2017.

Economic growth is measured by the increase in Gross Domestic Product (GDP). It is calculated by taking the monetary value of all the final goods and services of an economy and comparing it to some time in the past. So for instance the EU economy grew by 2.4% in 2017 meaning the monetary value of all final goods and services went up by 2.4% over the course of the year.

Economic growth is a necessary part of maintaining a healthy economy that improves the lives of its inhabitants. But many policymakers argue there should be less focus on it because it does not account for inequality - meaning the economic welfare of the majority of people could be getting worse while the economy grows.

The European Commission proposed an EU budget of €168.3 billion for 2020. With a focus on smart and inclusive growth.

21% of the overall budget will go to tackle climate change. This aligns with the ambitious target of spending 20% of the EU's current long-term budget on activities that address climate change.