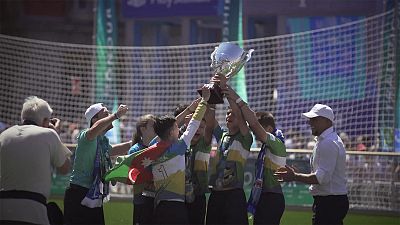 Football for Friendship is a social programme that was established in 2013 - this year it was hosted in Madrid to coincide with the UEFA Champions League finals. This was seventh time the event was put on by Gazprom, the worlds largest producer of oil and based in Russia, with over 5,500 children having taken part since it was created.

The programme lasts for 5 days featuring football training camps, workshops to teach good sportsmanship and the values behind the game and a tournament at the end. One focus of the event is to encourage multiculturalism - the attendees are from all over the world and this year 57 countries were represented.

This year Football for Friendship broke a Guinness World Record for Most Nationalities in a Football Training Session, officially witnessed by adjudicator, Anna Louis Orford. She said the event made an important point:

"The uniqueness of this record it shows that we can all do it. You can be tall, you can be young, you can be a girl, you can be a boy, that you can take part. It doesn't matter that countries maybe are not the friendliest to each other, you can still take part and play football."

The previous record was 50 nationalities but Football for Friendship comfortably exceeded this with 57 nationalities in total at the session.

Not just about football

On arrival, the participants are split into teams that are mixed-gender and multinational. Over the course of the 5 days they train together and get the chance to form friendships with kids from all around the world.

It isn't just about sharpening football skills and making friends though. The organisers concentrate on teaching the participants good values. This year an online programme was made for trainers so that they were able to teach respect on the playing field. Viktor Zubkov, the chairman of the board of directors at Gazprom, said coaches requested it:

"We got demands from different countries and regions, from coaches. They made proposals and asked to have this kind of programme. It is meant specially for them, this online training programme."

Former footballer Ricardo Carvalho said he wished he'd been able to attend the programme when he was younger:

"Unfortunately I didn't have this opportunity, but I fought to grow up and evolve. The most important thing is for them to chase their dreams and let them grow up like any other child."

The biggest day of the programme was the final, played in the iconic Plaza Mayor in Madrid. It ended in a tense penalty shootout. The winning team was the Antiguan Racers which included players from Kazakhstan, Russia, the Netherlands and Iran.

A highlight for many of the attendees was a chance to attend the UEFA Champions League Final.