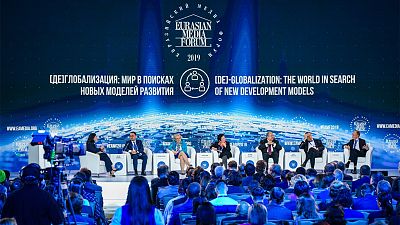 Artificial intelligence is a buzzword that is impossible to avoid in the tech industry right now. All the talk is of world changing technologies that will be created by applying it. The Eurasian Media Forum took place this week and featured debates on this exact topic.

For insights into which new technology will change our lives, one of the first places to look is in the field of artificial intelligence.

What is artificial intelligence?

Often referred to as A.I., artificial intelligence is a branch of computer science. It's a field of study that can be applied to make new technology. It covers the many different ways machines can mimic human thinking.

So where humans use their brains to perform a task - like driving - A.I. figures out how a machine can perform this same function - like self-driving cars.

The aim is for machines to be able to perform more complicated tasks that would otherwise require time and effort from a human.

"The renaissance of humanity"

The Eurasian Media Forum saw hundreds of journalists, researchers, politicians and professionals from the tech industry gather in Almaty, Kazakhstan where they held a panel: the age of A.I.: a renaissance of humanity?

Kairat Kelimbetov is the governor of the Astana International Financial Centre, he said new technologies will allow Kazakhstan's financial sector to quickly catch up with those in other countries:

"What we see now in the United States, is a lot of capitals moving into Silicon Valley, and a lot of new technologies moving to the financial industry, such as big data or artificial intelligence.

I think for Kazakhstan, it's a great opportunities – previously not being invested heavily to infrastructure of financial industry – now to leapfrog to the new destination too!"

Muthoni Wanyoike believed AI held solutions for needs in Africa as well, she works at Nairobi Women in Machine Learning and Data Science:

"A.I. systems will be able to give us quality healthcare without needing to employ as many doctors".

The applications of A.I. harbour potential for new powerful technologies. But Muthoni said there is an issue of bias:

"The issue with bias is that presently only 0,5% of global population can code or build algorithms, that means we are entrusting a very small percentage of the population to create systems that run the world."

Martin Ford, author of 'Architects of Intelligence', voiced concerns over the unintended consequences of A.I. technology:

"It's kind of a double-edged sword, it will bring enormous benefits in terms of breakthroughs in science, in medicine, things that will make our society better, but the other side of it is that A.I. very likely to lead to increased inequality, quite possibly unemployment at least among some group of works, people that do more routine, repetitive types of work."