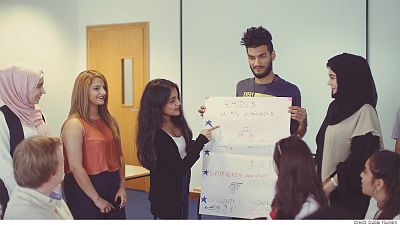 Dubai is known for being a major centre for business with a dynamic and diversified economy, but the city has also established itself as a world-class education destination.

This edition of Target takes a closer look at some of the world’s leading international schools and higher education institutions who have a base there.

Almost 290,000 students are currently studying across 209 private schools which equates to around 2 billion euros in revenue from annual tuition fees

"Education as a whole is very important for the economy," says Khalfan Belhoul the CEO of Dubai Future Foundation. "It builds ideas and it builds an educational platform that opens up a new industry, new sectors and this why we focus on leveraging education in the Dubai foundation - because we know that the style of education evolves and we want to continue innovating on how students consume education."

The UAE has the highest concentration of university branch campuses in the world and most are in Dubai, which currently has 34 of them including the London Business School.

"For us what's really important is that this is a government here who has a very long-term vision and understand the importance of education," says Dean of London Business School, Francois Ortalo-Mangé.

"So we find it a very good environment to set up education and to participate in the winds of change for Dubai, for the UAE and for the region."

Some of the most famous universities from Canada, the UK, India, Pakistan, Russia and Australia have set up branches here in Dubai’s Knowledge Park.

The University of Wollongong has around 108 different nationalities studying here.

"It's awesome!" says one Student from Wollongong. "Especially that aspect of it is multicultural. It’s something that I cannot trade for anything."

"It's very flexible actually for us because we get to choose our own timetable," says another student. "We can actually set up our classes according to our schedule. We can choose the number of subjects that we want to do."

The education sector has seen a 2.9% growth over the last year, with 90% of the students being expats.

For people from the UK, the uncertainty of Brexit also appears to be having an impact on education and, according to Marco Longmore - Head Master of Brighton College, Dubai, it has led to a shift in the choices some British parents are making:

"One of the concerns that people have about Brexit generally is a sense of uncertainty and I've found that Dubai offers stability, not just in their personal and professional lives, but also for their education. So a number of parents who may be considering a move back home for professional reasons are actually keen to keep their children educated here within the city."

Dubai shines a spotlight on the important role education play in society by hosting the annual Global Teacher Prize.

It was set up to recognise one exceptional teacher who has made an outstanding contribution to the profession.

This year’s award was presented by Hollywood star and former teacher Hugh Jackman:

"My sense of Dubai is they really seek the best. They're not afraid to go for things, take risks and just do and I'm sure that extends to the field of education.

The number of students is growing every year in Dubai and over the last 10 years, more than 70 new schools have opened up in the city.

With this greater choice, consumers are becoming a lot more savvy about the options and opportunities available here.

Extreme adventures to try in Dubai

How Dubai is making retirement easier for foreign nationals

The price of influence: why brands increasingly favour influencer marketing