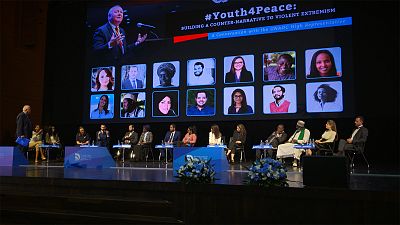 Violent extremism has become a common feature of the news cycle, often claiming religious motivation. And distrust, even hate is spreading between communities. The World Forum on Intercultural Dialogue in the Azerbaijani capital Baku tries to explore how to promote peace by actually talking to each other.

More than 500 members of international organisations and NGOs, religious leaders and researchers gathered for the 5th edition of the conference – hosted by president Ilham Aliyev.

“The main purpose of this forum is to demonstrate that mutual goodwill can make the world safer, more predictable and that dialogue is the best way to resolve things!” he told delegates.

Sri Lanka is one of the countries that have suffered violent extremism in the past and very recently – a country with four different ethnic and religious groups. Neluni Tillekeratne works for a movement that brings together young people from the different communities. Their starting point was a survey showing that 70% of Sri Lankans don't have any friends in another community.

If you don't have a friend outside of your ethnic group, you're making your decision to hurt somebody based on what? Things you heard, based on prejudice, based on assumptions.

“If you don't have a friend outside of your ethnic group, you're making your decision to hurt somebody based on what? Things you heard, based on prejudice, based on assumptions,” she says.

“If you and I, we were from two ethnic groups that were fighting each other. But we're young, so, it's our parents who have been fighting. And we knew for all our lives that we are supposed to hate each other. But then we meet at a conference and we are forced to be in a team together. The start, the first two days are going to be super awkward, but by the fourth day, the fifth day, we are forced to have a conversation about the realities of what our parents went through, our insecurities, our fears, and then you fear me, and I fear you…  Wait a minute! If can I just nullify it there! If I can promise you, that I will do what it takes to protect you, and you promise me that you will do what it takes to protect me. Then you and I, we're going to be OK after that!”

Her NGO was mobilised follow the attack on churches and hotels in Sri Lanka on Easter Sunday this year.

“Our Sri Lanka Unites students already took up the message of non-violence. They took up the message of unity, and they started getting on social media, telling their friends and family: ok, look, we know it was an Islamic group, but we also know that we have enough Muslim friends from all parts of the country, to be convinced of the fact that they would not endorse that. We're Buddhist, we're Singhalese, we're Christian - but we will stick to the fact that also the Muslim community is still Sri Lankan!”

I lost a hand about 25 years back, when I was fighting the Muslims, in my community. I lost it while I was trying to protect the church. I was trained to give in to a negative narrative about hating the other.

Pastor James Wuye from the Interfaith Mediation Centre in Nigeria is one of the participants who has had experience of hate – and overcoming it – not only intellectually, but in his body.

“I lost a hand about 25 years back, when I was fighting the Muslims, in my community. I lost it while I was trying to protect the church. I was trained to give in to negative narrative about hating the other,” he says.

“If you let go of the hate, you will be forgiven too! It's very difficult, but once one tries it, it's a remedy for everlasting peace and joy! If nations do not forgive nations, nations will destroy nations, we need to stop somewhere!”

Dialogue, tolerance and forgiveness in order to overcome deeply rooted hatred and conflict between individuals, communities and countries is what the World Forum on Intercultural Dialogue in Baku is all about.