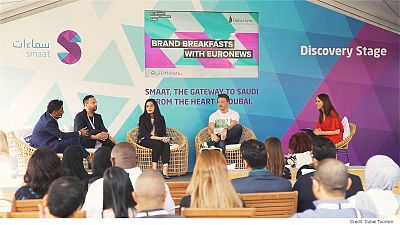 Virgin Atlantic reaching for the stars

Virgin Galactic - the spaceflight wing of the Virgin Group - is edging closer to becoming the world’s first commercial spaceline. 600 space buffs from 58 countries, including celebrities with already astronomical profiles like Leonardo DiCaprio and Justin Bieber, have booked spots on board the rocket plane.

"20 years from now, the price will have gone down. It is still going to be quite expensive, but it will be more like $30,000 rather than the current million. But in the short-term, for people who would be willing to pay a million dollars to go on an earlier flight, we've got a few slots available at that sort of price."

For adventure journalist Jim Clash, the thrill is worth the cost. He’s paid the deposit to join the likes of Bieber and Dicaprio on the waiting list for a 90-minute flight to space. As part of the trip, they will experience a few minutes of weightlessness and see the curve of the Earth. As far as we know, no member of the Flat Earth Society has yet applied to take part!

Jim Clash's attitude is, he's done most of the earthbound adventures:

"For me, the next logical step is space. It's only five minutes in space or less, so I'm certainly hoping to get a little bit of weightlessness in! I'm hoping to really enjoy it, because if you think about it, you're spending 40,000 dollars a minute to be up there."

Training for the ‘future astronauts’

Virgin Galactic’s chief astronaut instructor Beth Moses will train the customers  - or ‘future astronauts’ as they are otherwise known:

"My biggest takeaway from the experience is that the entire thing from takeoff to landing is extremely intense in a wonderful way, perhaps even more so than I had anticipated. The earth was so, so, so sharp and beautiful, far more than I could have predicted and the boost went on and on and on!

"People had said that to me, but until you do it, you don't realise what that means!"

But Virgin aren’t the only commercial space flight company out there - literally and metaphorically.

Elon Musk’s ‘SpaceX’ and Amazon founder Jeff Bezos’ ‘Blue Origin’ are also vying for a slice of the extraterrestrial pie.

Jeff Bezos says that safety will be paramount:

"This vehicle is going to carry humans, so we’re going to make it as safe as we can.

"We're going to test it and we're not going to take any shortcuts. We'll put people on these vehicles when we're ready to and not a second sooner."

2019 of course marks the 50th anniversary of the first moon landing by the Apollo 11 crew and whichever company manages to commercialise space travel first will have taken it to the final frontier.

More down to earth - in some ways at least - were the movers and shakers of the global communications and advertising world. They convened in Dubai earlier this Spring at the International Festival of Creativity - Dubai Lynx 2019.

According to those on the ground at Lynx, brands are now being forced to diversify their ad campaigns even further to reach consumers.  They are doing this with a mix of digital, video and social media advertising approaches, but combining this with the more traditional print, TV and radio campaigns.

This year, digital has overtaken print as the biggest and fastest-growing category for the first time; social media advertising is expected to hit 50 billion dollars.

Brand executives from companies like Twitter - where nearly 80% of people on the platform follow brands - say that the Middle East is one of the quickest-expanding regions from an advertiser and a revenue standpoint.

Alex Josephson, Head of Global Brand Strategy at the platform, notes that the activity and innovation are relentless:

“We see brands activating on the platform across every industry, in every vertical, from automotive, to telecommunications, to financial services.

“They're leveraging our platform to really start use our audience behaviour and insights to inform not just their strategy on Twitter, but often their strategy beyond Twitter too.”

Millennials continue to positively disruptive the global ad space, because conventional marketing just doesn’t resonate as strongly with their generation

“Why would they want to buy a car instead of going on a trip or starting kicking off a business where they experiment with it?

“Or actually buy an apartment when they can borrow or rent them out on Airbnb and make money out of it?”

Lightening the business talk with a few laughs at Lynx was the guest of honour, Emmy Award-winning  comedian and author Steve Harvey.

He says there are still things you can't find out on the internet:

“What a lot of young people are missing is the mindset, because Google has fooled young people into  thinking that they know everything.

“But you only get successful knowing what I know. You can’t just Google it!”

Away from Lynx, the EU and the US are on the verge of another tit-for-tat trade tussle. This is actually the escalation of a dispute that started 15 years ago, with both sides alleging that illegal government aid was paid to rival aerospace giants Airbus and Boeing.

This transatlantic aircraft subsidy dispute has been before the World Trade Organisation since 2004. Both sides accuse the other of offering illegal government aid to their respective aerospace heavyweights - Boeing in the US and Airbus in Europe.

The long-running saga is now coming to a head; President Donald Trump tweeted threats of tit-for-tat tariffs on €9.7 billion worth of European products, ranging from wine to large aircraft.

His tweet claimed that the WTO finds that the European Union subsidies to Airbus have "adversely impacted the United States, which will now put tariffs on $11 Billion of EU products!"

"The EU has taken advantage of the US on trade for many years. It will soon stop!"

The European Commission quickly hit back; American planes, handbags, cigarettes and even ketchup could soon be subject to new EU tariffs.

"Overall, the list represents an amount of roughly $20 billion of exports from the United States to the European Union. Now, when it comes to the possible decision on the level of US counter-measures, that decision has to be established in light of the final decision of the WTO."

That list came after the WTO filed a report confirming that US government subsidies to Boeing will continue to cause significant damage to Airbus, including sales losses. This spat, coupled with the ongoing US-China trade war and the existing US tariffs on European steel and aluminium, is leaving some investors feeling jittery.

"If there's going to be a constant series of new tariffs with various trading partners, I think that is going to make the market nervous, because you don't know what's coming next.

"So I think investors are disappointed today that it looks like there could be a new round of trade war with the EU over aviation."

But some believe that a deal that benefits both sides is still possible. The EU are still willing and able to try to find a tariff-free solution.

"We are ready as soon as they are. This is limited but there are meaningful ’win-win’ negotiations that we are offering. No more, no less."

It remains to be seen if Donald Trump, the self-styled ‘deal-maker’, can find some middle ground with Brussels, Beijing and beyond.