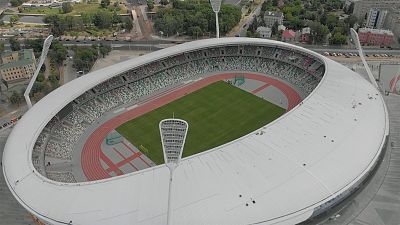 In June, the Belarus capital Minsk will host thousands of athletes and spectators at the European Games. Focus takes a look at how the city is preparing for the sporting event, readying transport and venues which are set to leave a lasting legacy.

The Belarus capital Minsk is getting in gear for the second European Games. Four-thousand athletes, from across Europe will compete at the massive sports event which was first hosted by Azerbaijan in 2015.

“Minsk is some sort of unique situation...we didn’t have to spend huge money for infrastructure, for sports venues and so on and so forth. We just had to renovate them and to make them be prepared to host sports in one city, at the same time.”

_“Those competing at the Games here in Minsk will battle it out for medals across 15 different sports, ranging from rhythmic gymnastics to wrestling, and from beach soccer to basketball,” says Euronews' Damon Embling.
_

Rhythmic gymnast Ekaterina Galkina – from Minsk – will be among them. She’s 22 and trains for up to nine hours a day.

“The European Games for me is one of the main competitions this year...next year will be the Olympic Games and I see light at the end of the tunnel. And, of course, I want to do my best,” she says.

Alexander is also training hard for the European Games. Now 20, he first picked up a table tennis bat when he was six. The Games could provide him with Olympic qualification.

“This is a very important, a very big competition, the European Games. It’s only the second time, it's also very special because I didn’t play in Baku, at the first European Games. And I try to do my best and I hope everything will be OK,” he says.

The European Games will not only bring scores of athletes to Minsk, but also officials and spectators. To help get everyone around, the city’s boosting its fleet of electric buses – all built in Belarus. They’re yellow – but green.

“When people will come to the second European Games, they can easily find more than 80 modern electric buses, on the most popular routes. Visitors can easily get to any sports event and they will see how our buses are environmentally friendly, quiet and comfortable,” explains Sergey Chistov, Deputy Chief Designer, Belkommunmash.

As well as green technologies, Minsk is a city embracing all sorts of other innovations – like virtual reality and artificial intelligence. The IT start-up sector in the city is thriving and tech firm Synesis has designed a special app for the European Games… a one-stop shop for information.

“Where the venues are, what programme of which sports are held there, even where you can buy tickets for the sports. All this kind of information is available in the app. Also, about places in Belarus, about Belarus itself, about Minsk. It’s very interesting," says Alexander Gvozd from Synesis Sport.

Developers here have also come up with a digital platform to help organisers manage the Games – providing all sorts of logistical information.

"We help to organise processes in accreditation, in accommodation, in arrivals and departures, transport, logistics, venue management,” says Nailya Timerkhan, from Synesis Sport.

Beyond the European Games, the buzz word is legacy with the event's organisers keen to ensure Minsk reaps long-term rewards.

“We’ll have more than eight-thousand young volunteers, which will serve as a dynamic and energetic people during the Games and after the Games. We are also not spending money for the Games, we’re investing them into the modernisation of the city infrastructure… to create a more green and friendly, for the citizens, city.” says Anatol Kotau, from MEGOC.

For those competing in the Games, the countdown is now on. Gymnast Ekaterina is looking forward to a strong home crowd when she takes to the floor here at the Minsk Arena.

“Of course, a lot of my friends, my family will be there. I hope it will help me and a lot of people come to support me. And I think everything will be perfect,” she says.