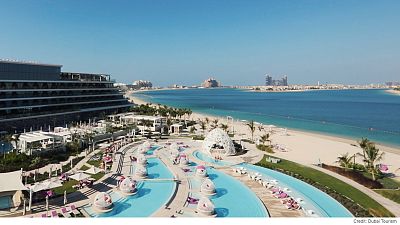 Dubai is known for glitzy five-star hotels and for coining the distinctly unofficial term “Seven Star”, but lately a steady rise in more affordable hotel rooms in Dubai has definitely taken place.

This is partly due to competition from growing local and international hotel brands aiming to offer guests a comfortable stay combined with competitive prices.

The mid-range ‘Rove’ hotel chain claims to offer a hotel for the modern, value-conscious, socially-connected generation.

Paul Bridger, Corporate Director of Operations at Rove Hotels said: “Traditionally Dubai has been famous as a luxury destination. But we consider Rove to be affordable lifestyle hotels, so that you get a great price point. We offer amazing service, a really good product and you also experience the local community.

“Also, I think the reason for coming to Dubai is changing. Before it was very much a beach destination and while we still have that, I think people now also come for a stopover en route between Europe and Asia and then back to Europe. So the reason for visiting has really changed,” he added.

Paul’s comments were echoed by some visitors.

Doug, on business from South Africa, said: “I think most business travelers just want somewhere clean, convenient to stay. You don’t need all the trimmings.”

Neil from England agreed: “These hotels really suit the mid-range budget, that everyone can aspire to.”

The hospitality sector in Dubai is set to experience strong, sustained growth over the coming years, with rising occupancy levels expected to reach more than 35,000,000 by the end of the year.

Dubai is the 4th most visited city in the world and 20% of its GDP comes from the tourism market.

Nicholas Maclean, Managing Director of the commercial real estate and investment multinational CBRE's Middle East operation said: “We have about 125,000 hotel rooms here in the Dubai market and we have another 33,000 under construction at the moment. This is a very commercial location, so that kind of construction wouldn’t be contemplated unless we felt there was true demand for that expansion in the sector moving forward.”

According to Dubai's Department of Tourism and Commerce Marketing, the resort is home to 260 one to three-star hotels and 259 four and five-star establishments.

Something for every budget

Anne Scott, General Manager of the newly-opened W Hotel on Dubai’s Palm, believes that Dubai has something for every traveller's budget, but that hotels must offer that something extra.

She said: “When you’re launching a new product or any new hotel opening in Dubai, you would have to decide: ‘what strategy do we have, what game am I in? What position am I going to make?’

"And if we allowed ourselves to simply be economy or commodity-based, then we would only be competing in terms of price.

"So I think the only alternative if we don’t want our hotel to simply be seen as a commodity, is to find ways of differentiating based on experience so funding things that make you unique, different and special - and for the customer to then make the decision based on those factors rather than the price.”

Following on from Expo 2020, which takes place next year, visitor numbers are expected to reach 25,000,000 by 2025, which means Dubai’s hotel industry is presenting itself as a showcase to the world.

Anne Scott added: “I think Dubai is a place of fantastic connectivity, a great hub for airlines and its well known as being a collection of safe, world class facilities which continue to innovate and create different customer experiences.

"Anybody driving through Sheikh Zayed Road in the last ten years will have seen something different popping up on either side of the road every time they drive down it and that continues to reinvent this most amazing city.”

“There’s clearly a lot of choice for the travellers who come here and price is very important. We have to maintain the level at which our pricing is competitive otherwise there are a lot of competing locations around the world that people can go for.

"So it’s the integration of various components of the economy and visitor experience which are important here.”

Dubai is ramping up its efforts to offer something for the discerning and savvy traveller whilst increasing its overall appeal, accessibility and affordability.