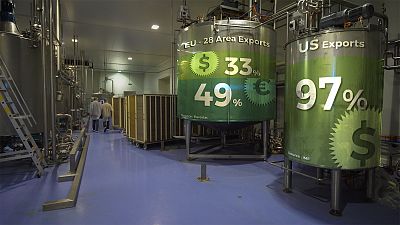 Real Economy looks at how the euro can challenge the dollar's dominance as an international currency, and how switching to euros could be good for European business.

Europeans identify the euro as one of the main symbols of the European Union, but for many European businesses, the dollar remains the main currency of choice.

In his 2018 State of the Union Address, European Commission President Jean-Claude Juncker called on the EU to promote the euro as a global currency to rival the US dollar.

More than half of all non-EU imports were invoiced in US dollars in 2016. At the same time, just a third of the goods brought into the EU were priced in euros. The three sectors the US dollar dominates are energy, raw materials and transport.

When it comes to energy, more than 80% of Europe’s imports are priced and paid for in US dollars, despite supplies coming mainly from Russia, the Middle East and Africa. That amounts to €240 billion over the last five years. The situation is similar when it comes to raw materials and the food commodity markets.

Chocolate is one Belgium's most famous exports and the Belgian Chocolate Group produces more than 8,000 tons of the stuff, to be sold in almost 100 countries.

David Vermeire, Asian Market Director at the Belgian Chocolate Group said: "A more international euro would definitely mean more growth for our company and for other European companies because that would make us more competitive than US companies, and it would also make the sales process much easier.”

A fifth of the company's production is exported to Asia.

“When trading with Asia, we always use euros, that’s actually a company policy of ours, because it makes it easier for us administration-wise," Vermeire adds.

Francesco Papadia, senior resident fellow at the Bruegel Institute, explains: "There are some benefits in having a currency that is used internationally. For a long time, there’s been talk about the ‘exorbitant privilege’ that would accrue to the United States and this was seen essentially in financial terms.

"What do the United States get out of the global use of the dollar? Trade would be a very important area in this respect. Invoice trading in your own currency, of course, would help with importers and exporters and would help small and medium firms in particular".

"First, it would eliminate foreign exchange risk. Secondly, it would help them financially because trade credit and all sorts of funding in your national currency is more convenient."

The international role of the euro is not just measured by trade. Businesses and foreign governments also use the currency for issuing debt: by the end of 2017, more than 20% of debt issuance on international markets was denominated in euros.

Then there are international reserves of foreign central banks, where the euro represents around 20%. According to the International Monetary Fund, the US dollar’s share of currency reserves is going down, while the euro’s share is up.

Sasha Vakulina, Euronews business editor: What is behind the data on the latest report by the International Monetary Fund?

Valdis Dombrovskis: "There are a number of factors in play. In any case, I think it is an indication that despite its young age – and the euro is only 20 years old – it is already a successful currency and a strong world currency. And another factor is also that we had seen lots of unilateral actions from the US side in recent years as regards trade, as regards dollar-based transactions, and that may also facilitate the shift toward the euro."

Sasha Vakulina: "In the latest communication, the European Commission states that completing the Economic and Monetary Union and the Banking Union would help reinforce the international role of the euro."

Valdis Dombrovskis: "This is one of the factors. We see it more as a basis for then more targeted action. Because it is clear that for the euro to be strong internationally, first and foremost it needs to be strong domestically. And that is indeed where we have an agenda on completing the Banking Union, completing the capital markets union. Also, proposals on how to strengthen the resilience of the eurozone and the euro area economies."

Sasha Vakulina: "The Commission launched several targeted consultations to explore how to increase the international role of the euro in specific sectors. Would it make sense to introduce regulations and in some sense force businesses to use the euro?"

Valdis Dombrovskis: "First of all, if we want to strengthen the international role of the euro, I don't think we can force businesses outside Europe to choose the euro. It is for businesses to make decisions and outside Europe, they can also choose dollars of local currencies. Basically, it is their choice.

"Our approach here is not so much to change things through regulation, but through creating the right incentives for market participants, and also for businesses, to see that they can rely on the euro and they may be protected from a unilateral action, as the US is currently in a sense weaponising dollar transactions as a tool of influence."

Juncker's State of the Union: The words to remember