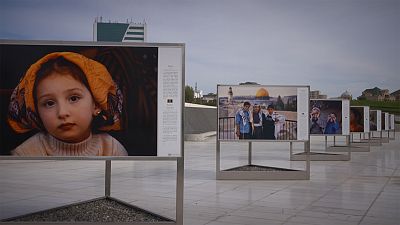 This episode of Focus takes us to the Humanitarian Forum in Baku, Azerbaijan, where the human development intercultural strategy faces the crisis of globalization.

Innovation , human development and integration took the center stage at the Sixth Humanitarian forum. The conference was inaugurated by the Azeri president, Ilham Aliev.

The forum became an opportunity to debate the crisis facing globalization and its models, right at the moment when the process of inter-state integration around the world , such as the European Union, seems in danger.

According to the Azeri foreign minister the EU is still a benchmark.

The Baku forum debated the case of the EU. The block is traditionally seen as a kind of paradigm for inter-state integration in the context of globalization, especially regarding the free movement of people. But nowadays new walls are growing, even in the heart of Europe,

One Italian Liberal-Democratic politician, Ettore Rosato, insisted this was not the way forward.

"We have to tear down the walls and make globalization a process that develops individuals and not just an economic and financial mechanism. Our young people, those who have experienced the Erasmus programme, have seen the good side of globalization, and we have to invest in that. It's a huge challenge, and Europe is the engine of it," he said.

Examples such as Erasmus look like a success story, but young people and students will always travel before settling down, anyway. Many people just feel they have lost out to the "winners" of globalisation.

"We are blaming the wrong object. We are making the wrong distinction, for example saying there is the way of populism that is a threat for humanism, I think quite the opposite: the continuation of a global elite to lead or trying to lead humanity in a technical post-human direction is the real threat and the real danger, and people react," he claimed. Dugin is on the far-right of the political spectrum, but few others present here share his extreme views.

What are the inherent characteristics of globalization? It's not just the power of wealthy elites, but also the challenges posed by mobility, and the opposition to migation and diversity. A Spanish political scientist says new walls endanger the two-decades-old intercultural approach among countries.

"Mobility doesn't only generate diversity. This diversity is directly attacking the foundations of many states, challenging nationality, one of the basic foundations for the legitimacy upon which states have been built," says Ricard Zapata of the Pompeu Fabra University in Barcelona. "Globalization is an irreversible process as much as diversity within states. And the states still have a lot of problems accepting that."

The Humanitarian Forum of Baku also addressed the questions of Innovation and technology, which are evolving faster than states and people. Fears are on the rise concerning artificial intelligence that, according to some critics, could see humans replaced by robots.