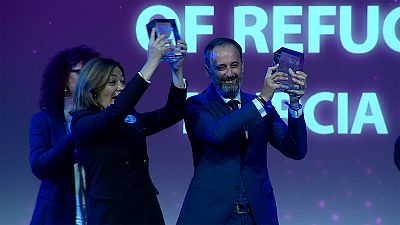 Five projects from regions all over Europe have won a RegioStars Award for the best ideas to create jobs and improve people’s lives at a regional level.

During the 'European Week of Regions and Cities' the European Commission's DG Regio also celebrated 30 years of the EU's Cohesion policy.

One of the categories was 'achieving sustainability through low carbon emissions', and the winner of this award was the Helsinki region in Finland, which has made great strides with the recycling of cotton. With fashion having a very large carbon footprint, cotton textiles are recycled and re-spun into a viscose-like fibre using less-polluting chemicals and producing less waste than most techniques.

"We try to promote the circular economy and our tool is that we build up a new type of textile-producing technology. It will give a better world for our children – and it will save the world!" says the Cotton recycling Project's Marjo Määttänen.

The EU Commissioner for Regional Policy Corina Crețu is enthusiastic about the awards, which she says help raise awareness.

"I am a big fan of exchanging good practises and we see something that is growing, that is having an added value on the ground, creating jobs," she said.

Next up was a member of the Committee on Regional Development Lambert van Nistelrooij,

presenting the RegioStars 2018 award for investing in cultural heritage. This went to Wales, and the Nant Gwrtheyrn project.

"For the last 40 years we've been rebuilding the Welsh language and Nant Gwrtheyrn is a place where adults can go to learn Welsh," he said.

The Welsh Language teaching project has given a boost to the village.

"The EU funds step in when somebody has a dream, which can really make a difference. So, you need funding to help you to make that reality, and that's what happened in Nant Gwrtheyrn: it was a dead village, nobody lived there, and we were able to rebuild it and now it's a vibrant community, which employs 30 people," O'Rourke continued.

For the President of the European Committee of Regions, Karl-Heinz Lambertz, the awards are about more than self-congratulation.

"All the projects that are nominated are projects where something special has been achieved which can inspire others, and where you can see that Europe is nothing to fear, Europe is something that gives hope!" he maintains.

The region of Murcia in Spain won an award in the category 'Addressing the migration challenge'.

"Our project is a protocol to help people, refugees, to obtain basic needs like houses, health and all the support for skills for jobs."

Mohamad Tarek Gellawi is a refugee from Damascus in Syria:

"The program was very helpful to me and my family to put all the horror behind us!"

"We have designed, with European funds, a protocol, that not only talks about figures or about budgets, it talks about people, people that have these dramatic situations, and with our help they have light in the future,' adds Javier Celdrán Lorente.

Among the other winners is a Czech initiative to provide social housing to poor people, and a Portuguese project attracting IT businesses to a largely rural region.