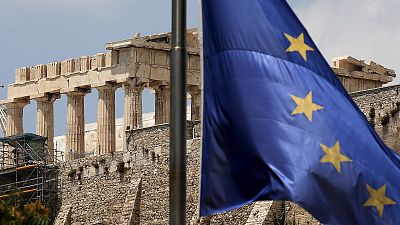 The ruins of ancient Greece have come to symbolize for the world sky high debt with bailouts, 450 reforms, 4 governments in eight years and austerity that is unimaginable in the modern world. But cautiously – and despite repayments due to the Eurozone well past the year 2060 – Greeks and Europe are ready to chart a new course, after what feels like a neverending saga.

Chronology of a crash

To exit the bailout the government has signed up to continuing reforms and some pretty big budget surpluses. To do that in a country with high unemployment means keeping taxes high, and that’s not attractive to foreign investors who are needed to create growth and those much-needed jobs. So can domestic businesses like shipping have enough traction to make a difference to everyday Greeks?.

Greece still leads the world's shipping industry, despite the turmoil of the near decade-long economic crisis. Greek shipowners control over a quarter of the world's crude oil tanker fleet, almost one in four of the global dry bulk carrier fleet and just over 15% of the world chemical product tanker fleet. In 2017, shipping commerce increased by almost 17% on the previous year, with an estimated value of more than €9 billion euros.

The statistics underlying Greece's shipping sector are truly impressive. Despite Greeks representing only 0.15% of the world's population, the ships that carry 20% of global seaborne trade are controlled by Greeks! However, the shipping industry, suppliers, and Greek society in general are still facing serious problems due to overtaxation.

The president of the Greek Merchant Marine's Engineers Union is not optimistic that the problems created by the crisis will be solved when the bailout programmes end.

"Ιs there going to be a withdrawal of all these consequences, the anti-labour laws brought in in recent years?" asked Athanasios Evangelakis. "The opposite will happen. These laws will continue to be in force, and any kind of growth will be built on the debris of labour rights. So, the question is: growth by whom for whom?"

Commerce in the country's largest port has been hit hard by the economic crisis. Nikos Manesioitis, the head of the chamber of commerce in Piraeus says in the last nine years one out of three stores in the city has closed: "A business, like mine, with a net profit of 70,000 to 75,000 euros - and believe me there are few companies that have earnings of that level - pays taxes between 55% to 65%," he told Real Economy. "Out of these 75,000 euros we have to deduct this rate for taxes and then we have 30,000 euros. Out of 30,000, however, I am obliged to pay another 20,000 euros for insurance contributions, because I have an income of over 70,000 euros. Finally, after a year of great effort and hard work from a net profit of 70,000 euros, I get only 10,000 euros, which is less than 1,000 euros per month.

Some believe that by the end of August Greece will have finally sailed out of the troubled waters of the financial crisis. But many others think deep cracks remain in the hull of the Greek economy, and that much repair work remains to be done before it becomes seaworthy again.

Ordinary Greeks aren’t yet feeling the benefits of the increase in foreign investments either over the past two years. Real Economy's Maithreyi Seetharaman met Deputy Prime Minister Yannis Dragasakis to find out when growth would be tangibly felt.

Maithreyi: Deputy Prime Minister, what did you bring to show us where Greece is headed now after years of pain?

Dragasakis: I brought a small ship for the new journey that we must make as a country now, and I also brought something that for us is a compass. It's our new growth strategy. In reality, Greece for the first time has a national growth strategy, which describes aims and means – what we want to do and how we will do it, and where we want to go. Even in the event that something does not go well in the markets. We have strong reserves. We have strong surpluses. All these factors are enough to inspire confidence."

Maithreyi: At the end of the day growth really comes down to a strategy, a clear sustainable plan. Do you have one?

Dragasakis: We know that in 2021 we will have achieved certain targets in various sectors. We therefore have targets and timeframes. So people can check the government’s performance. The second thing we are saying is that we have already institutionalized stability in certain sectors. For example, if a large investment comes to Greece, it will have the same tax regime for 12 years. So, nobody can change it. When we talk about investments in Greece, we are talking about reinforcing a dynamic that already exists. With the non-performing loans and banks, the sale of those loans has started and the restructuring of many companies has started.

Maithreyi: How do you plan to balance the people’s needs with the reform agenda that you have?

Dragasakis: I would call it 'how normality returns for citizens.' It's a crucial issue. We will reinstate collective bargaining for workers. We will abolish the law that froze the minimum wage, there will be certain procedures to allow an increase in the minimum wage and this will happen. That’s why we’re talking about inclusive growth."

Maithreyi: So who at the end of the day will end up paying? Will it be corporations, will it be private individuals?

Dragasakis: We are in a dialogue with the business world as to which taxes we should reduce. Someone could reduce taxation on profits; you can reduce taxation on investments, you can increase the percentage of write-downs. We have decided that in the first year, 70% of funds will go to reducing taxation and 30% will go to increasing spending.

Maithreyi: What are the things that your government is not going to move on?

Dragasakis: On salaries, we will create the conditions that will allow workers to seek, through negotiations, the improvement of their income. On pensions, we will avoid further cuts… I say that because reforms were identified in a negative context. Now we are talking about changes, about transformations that will be such that people will see positive results.