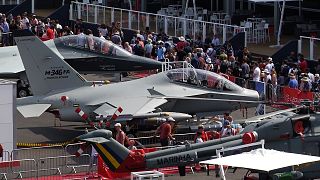 Real-life flying cars, space robots and jet-powered flying suits are just some of the highlights to come from the biennial Farnborough International Airshow (FIA) this year.

Exhibits including the Pal-V Liberty, a gyroplane and roadster-in-one, and the luxury Volante Vision Concept, a three-seater aircraft or “sports car for the skies”, according to Aston Martin’s Simon Sproule, drew crowds during the week-long event.

Drones, supersonic air travel, virtual reality and Brexit were also on the agenda.

Up to 80,000 visiters surveyed the 1,500-plus exhibits, and were no doubt dazzled by the flying displays, of which the Red Arrows, wingwalkers and explosive pyrotechnics featured.

It has also been a good year for business. According to the FIA, around $192bn deals were sealed during the week – up $67.5bn from the last show in 2016 – despite Brexit being just 37 weeks away.

But Farnborough is not just about shaking hands and signing orders: charities had also journeyed to the airfield in Hampshire, southern England, to promote their missions and enlist more support.

Among them was Aerobility, which setup a stand to show-off a plane they were building onsite with a team of disabled volunteers. The goal of the Surrey-based non-profit is to make aviation accessible to handicapped people, and its CEO Mike Mike Miller-Smith is himself a certified pilot, despite his degenerative illness.

“I have a condition called muscular dystrophy, which basically makes all your muscles don't work very well,” says Miller-Smith. “So it’s been a challenge to carry on flying but we found a way, and I think it’s great that disabled people like myself can help other disabled people leave their wheelchairs or their sticks, or the issues they’ve got on the ground, and help them to fly.”

Watch our highlights from the air show in the video player at the top of the story.