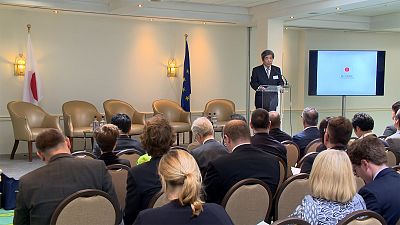 A historic economic partnership agreement between the EU and Japan - which is being signed in Tokyo this week - is set to ease tariffs and restrictions.

It has been years in the making and promises to make trade easier in areas such as agriculture and food. The agreement will boost investment and the sharing of skills and knowledge.

Japan’s ambassador to the EU has joined business representatives at a seminar in Brussels to spread the word about the new deal - which should save EU exporters around a billion euros in customs duties every year.

According to Kazuo Kodama, Japanese Ambassador to EU: "This will create a huge, free-trade zone, which comprises 640 million people of EU and Japan. And also the combined GDP total will amount to one-third of the global GDP. So this will be a great opportunity for enhancing the welfare of the people in Europe and Japan."

Danny Risberg, Chairman of the European Business Council in Japan, says: "If we look back ten years ago, it was really hard to do business in Japan. This should remove a lot of the hardness, so it's a lot easier to do business. And when that happens, it allows you to put more focus on your marketing and the areas to grow your business, than it is to just maintain and follow rules and get started."

From biotech to cars, from wine to cheese, all sorts of industries are in line to reap rewards from the new trade freedoms.

Doctor Hosuk Lee-Makiyama, a senior fellow at the London School of Economics, has been analysing the new trade agreement, says: "Consumers will see better competition and therefore better products as well as better prices. And most of all they will find that a number of new features and technologies, as well as new products, that were not available at least at the same price, will be more widely dispersed across the economy."

The economic pact is expected to come into force next year – heralding a new era in EU-Japan relations.