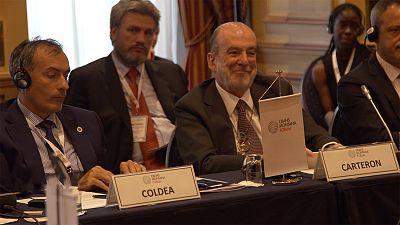 When a prestigious and well established Swiss NGO invites you to a debate, amongst other things on the perversity of globalisation, well, you want to listen closely! Specifically, at a time, where climate change, rising inequality, poverty make many people feel uneasy with this phenomenon. That was part of the debate here at the Crans Montana Forum in Brussels.

Hundreds of politicians, business leaders and representatives of international organisations gathered for the 29th edition of the Crans Montana Forum. The state of World affairs is debated here, without fear nor taboos.

Jean-Paul Carteron, Honorary Chairman & Founder, Crans Montana Forum, said: "Globalisation is perverse in itself. There are no more borders, everything is free, everything is open, the market is supposedly self-controlling ... but that's not true! What we see today is that in most countries that suffer, people turn to the right! And then we have the return of right-wing movements and nationalism."

The poorest nations have never seen the advantages of globalisation materialise – and many feel there is an injustice.

Dioncounda Traoré, former President of Mali, said: "It is obvious that the riches of the world are poorly distributed: there is a minority that owns the essential part, and a majority who lives in misery."

Former President of Republic of Kiribati Teburoro Tito said: "Climate change and globalisation go together, hand in hand. I think it's because of industrialisation, right? Industrialisation means, you know, you must accumulate, you must build a big profit, as much as you can, and regardless of the environment."

Globalisation is everywhere. Such as the influence of social media platforms in political campaigns in Africa, where traditional media are less followed and young people are increasingly online.

Ogutu Okudo, the advisor to Siaya County Governor in Kenya, believes: "Facebook, Twitter, YouTube and all of these platforms that are being used in this digital ear, it's time for them to also see their role and their corporate special responsibility and a greater world stage."

In a world where "the right of the strongest" is back in world affairs, many participants hope the European Union will remain the guarantor of multilateralism in international politics.

Lilyana Pavlova, Minister for Regional Development of Bulgaria, says: "Multilateralism is questioned, and I think, yes, Europe is the last bastion who is protecting it.

The organisers have one over-arching goal: to work towards a more humane world through international cooperation and dialogue.