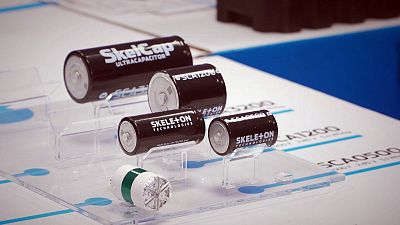 From powering electric cars to storing renewables, revolutionising the way we hold on to energy remains vital if we are to wean ourselves off fossil fuels and decarbonise the economy.

Batteries and other energy storage devices, such as supercapacitors or ultracapacitors, are seen as crucial to this and by 2025, Europe’s battery sector is expected to be worth a massive quarter of a trillion euros annually.

Unlike batteries, which store energy chemically and hold on to it far longer, ultracapacitors can be charged quickly and are good at providing rapid bursts of power. Currently, such devices are used to start car engines. They can also provide top-up power when balancing supply and demand on national electricity grids.

The problem with ultracapacitors, however, is that they cannot store nearly as much energy as batteries, which means they soon run out of juice.

This isn't a big issue when an ultracapacitor is being used to charge a small device like a power tool, which can be recharged in a matter of seconds. Things get complicated, however, when it comes to electric cars or buses. Recharging every few kilometres is neither desirable nor practical.

A game-changing device that can bridge the gap between batteries and ultracapacitors has, therefore, become a major quest for researchers in the energy storage field.

Professor Andrea Balducci, Friedrich-Schiller-University of Jena in Germany admits, in the short-term at least, we are likely to see a combination of lithium-ion batteries and ultracapacitors in electric devices, particularly in cars.

"Most likely we will not just have one device, but we'll have more of them because we'll need to fulfil more needs. For energy application, batteries will be the device of choice. For high-power application we need other devices like supercapacitors.”

One firm working to make fast charging ultracapacitors last longer is Skeleton Technologies. Its products are used in hybrid vehicles, especially buses and trucks. The European Space Agency is also a customer; using Skeleton’s ultracapacitors in its satellites.

The company's CEO Taavi Madiberk says the company's ultracapacitors can deliver four times more power than anything else currently on the market, thanks to its special graphene material.

“What sets us aside from the competition is that we have brought on the market a technology which has four times more power density and up to two times higher energy density, and the secret sauce behind it is a curved graphene material. In one gram of this material, the surface area is 2,000 square metres, meaning that if you take two grams of this material, it's the size of a football field.”

In addition to super-fast charging, another advantage ultracapacitors have over batteries is their life cycle, with charges and discharges of up to a million times.

The European Commission recently launched a 10 million euro prize to help develop a new battery for eVehicles. The challenge is to develop a battery or energy storage system that is able to be charged in a few minutes and allows the same driving range as standard cars.

Madiberk thinks such an exciting prospect is only a question of time and could be a reality within the next decade.

“Elon Musk has said ultracapacitors, not batteries will be the future of electric vehicles. If you look at the future for the next 5 to 10 years, then ultracapacitors will be used as a fast-charging unit. And imagine if you go to a charging station, you can literally charge your electric vehicle in a matter of seconds and have the initial driving range that you need to get home or to work."

While the environmental benefits are obvious, Professor Balducci says the economic boost from such technologies will also be huge.

“All these applications require new devices and these devices require new technology and this will bring new places of work and new business. This is actually one of the biggest businesses in the future, most likely."

Thanks to financial support from the European Investment Bank and the EU's SME fund, Skeleton recently opened its new factory near Dresden, creating 50 new jobs. The package totalled around €17.5 million.

Madiberk says such public backing is vital if we are to develop cleaner technology.

"I think that the policy, what's been in place, has been of strong support. Because even if you look at Tesla, some of the people don't know this but Tesla, without the half-billion dollar loan from the Department of Energy, would not exist today. So I think in terms of clean technologies our public policy is really important.”

Madiberk also insists that Europe must not be left behind by the US and Asia when it comes to finding new energy storage systems, though remains optimistic about the future.

“Why was Skeleton Technologies brought to life? We are here to help to save energy and reduce C02 emissions. So ultracapacitors will have a major impact in a number of industries, from bus and truck, green and renewables, industrial equipment and electric vehicles, to make electrification cheaper and to bring it to more people. This will not solve all of our problems but it's an important stepping stone in terms of fighting climate change."