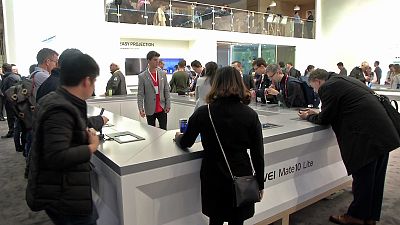 The Mobile World Congress in Barcelona is the place where tech trends for the year ahead are set. The world’s biggest companies come to display their latest gadgets.

Samsung with its new flagship Galaxy S9 and LG with a new generation of phones powered by artificial intelligence.

The Congress programme is built around 8 core themes and Euronews met up wtih Mariya Gabriel, the European Commissioner for Digital Economy and Society, to discuss some of them.

There is a dark side

With 8.4 billion connected objects in the world, we asked her about the new challenges for tech safety.

“We need to strength different some different aspects of education,” she said.

“In 2018 I have already initiated the European information campaign on media literacy, on cyber literacy. It is really important not only to focus our efforts on our young people. Somehow young people don’t need this kind of training, they know very well. But we need to work more closely with parents wth school directors, with teachers. That is an enormous challenge.

The EU’s General Data Protection Regulation – which comes into force in May – was one of the hottest topics at the congress. We asked the Commissioner where the balance lies between tech safety, global security and privacy.

“On one side we would like to say very clearly – for us the protection of personal data is a core value of the European Union,” said Gabriel. “And for us it means security for citizens.

“On the other side we would like to get a more proactive approach on some topics: fighting illegal content. We can say it very clearly that in our society there is no place for terrorist propaganda or child abuse. We need to do something.”

While the big brands are out in force, the Barcelona congress is also an opportunity for innovative startups to make their name – at a parallel event called Four Years From Now – better known as 4YFN.

Young entrepreneurs bring their ideas – all remembering that Facebook was also a tiny startup not so long ago.

Esteban Redolfi is the director of 4YFN. He shared one of this year’s success stories.

“I will tell you a story of this edition. It’s a Spanish startup. They are working in Artificial Intelligence with an amazing product. They are trying to detect the rate of veracity of speech. So whenever anyone talks they just analyse the patterns and they say ‘OK, the probability you are lying is 30 percent rate, or the possibility that you are lying is 70 percent, it is really high, you have a great risk’. They came here, they met insurance companies that are trying to track who is lying to their insurance. And they are already doing a pilot together. They are launching this product together with one of them I cannot say who, but with one of them, they are launching together an entire product and it has happened in just two days.”

The big change over the 5 years the event has been running? Esteban says big businesses are taking startups much more seriously and are more eager to work with them.