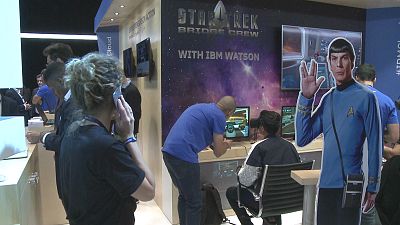 With some 60,000 visitors, the WebSummit 2017 in Lisbon is one of Europe’s biggest tech conferences.

Everyone this year was talking about how to take advantage of digitalisation while also being wary of its pitfalls.

It’s a message echoed by one of the keynote speakers at WebSummit – Margrethe Vestager, Europe’s competition watchdog.

“Tech holds enormous possibilities, we can do great things with tech, as you see here at the WebSummit. But technology should serve people, and I think now we are at a time where we are more sensible – our optimism on tech is being balanced with a more cautious approach,” said the European Commissionner.

The #future of #technology good for #humanity ? good polarizing debate: Pat is optimistic mankind is progressing thanks to tech, Ross isn't ! #WebSummitpic.twitter.com/DabjUK6f8k

Her call for calm comes amid a huge rush to get connected. Everyone at the summit is online most of the time, exchanging data and ideas – yet half the world’s population is not connected yet.

However, that is forecast to change, especially as super-fast 5G networks are rolled out.

“When we look five years forward we’ll have full 5G implemented, which means today there’s a maximum number of connections allowed of about 1 billion, and under 5G that will be closer to 100 billion,” said Walter Jennings, vice-president of Corporate Communications at Huawei Technologies.

Many of the technologies seen at WebSummit – the conversations, the presentations, the talk about Artificial Intelligence, the ability for machines to learn, reason and self-correct – hold great promises for society. But there are also those who are issuing warnings. Among them is Professor Stephen Hawking, who gave his views on AI in a keynote speech on opening night.

“We cannot know if we will be infinitely helped by AI, or ignored by it and side-lined, or conceivably destroyed by it,” he said.

Artificial intelligence has existed as a technology for some time, but the increase in connectivity that the internet offers has opened up AI to more users in different parts of the world with different priorities.

According to Marcus Shingles, CEO of the NGO X Prize Foundation, “When you combine AI with 3D printing and biotech and blockchain and big data, it creates a completely different world of problem-solving that we can get into.”

A more extreme vision of what super-intelligent computers could offer us is put forward by digital pioneer Ben Goertzel and his robot Sophia Hanson.

“AI can free us from having to do stuff we don’t want to do,” he told Euronews’ Jeremy Wilks. “And then we can merge our minds with the superhuman AI, or we can remain humans and have much more entertaining lives, and this is not to mention curing all death and disease so we don’t have to get sick and get old and die unless for some reason we feel like it.”

Ben Goertzel holding forth on AI at #WebSummitpic.twitter.com/0sDF3OkGfM