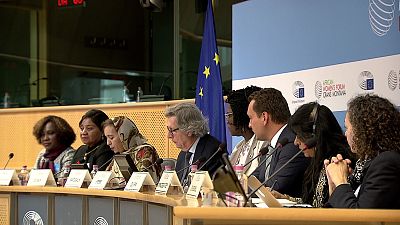 Women are central to the fight against youth radicalisation and the management of irregular migration. Protecting the victims and fostering female leadership were on the agenda at the Crans Montana Forum’s African Women Initiative, in Brussels.

According to the UNHCR, women and children make up nearly 60 per cent of refugees and migrants and are at greater risk of exploitation and violence.

The same source says around 90% of all children on the move are unaccompanied or separated from their families.

Italy is one of their main points of arrival in Europe.

“We have adopted a special bill for these children, so they are included, adopted by families and given an education,” Italy’s senate vice-president Linda Lanzillotta told Euronews.

For women and children from particular minority groups, the situation is worse. That is the case for the Yazidis in Irak and Syria, who have been targeted by the so-called Islamic State in what the UN has called a genocide.

Sakharov Prize laureate Lamia Haji Bachar is a survivor. She says she hasn’t seen much progress: “The situation for Yazidi refugees is very bad, particularly those in Iraq. Until now, no steps have been taken to help or protect them.”

The forum was also a chance to reiterate the need to invest in programmes for the empowerment of women, to give them more resources to fight youth radicalization both at home and at school.

Hajbouha Zoubeir, Deputy Chairman of the Phosboucrââ Foundation, spoke about a territorial development program project in the south of Morocco.

“The Foum El Oued Technopole will help young people by boosting research and development, offer training and education, and help create start-ups and businesses both for young entrepreneurs locally and for the whole of sub-Suharan Africa,” she said.

A two-fold strategy for the EU – boosting job creation locally, and creating legal pathways to Europe with resettlement schemes for the tens of thousands of migrants expected to arrive in the coming years.