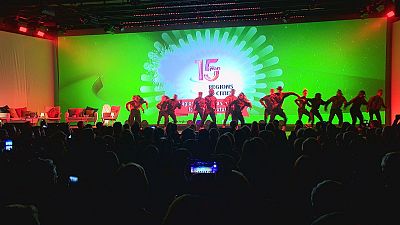 The Awards are a yearly competition honouring Europe’s most inspiring and innovative projects that support people’s lives through the creation of economic growth and jobs at a regional level.

A jury whittled down 100 candidates to five winning projects who were selected to receive the prestigious RegioStars trophy from the EU Commissioner for Regional Policy, Corina Creţu.

“The projects that have a real impact on the life of the people, Creţu said.

“We are talking about the future of Europe and in fact, it is the future of the next generation and they build by themselves their own future with this kind of projects.”

There are five categories: specialisation for SME innovation, climate action, training, cities in digital transition, education and, for the first time, women empowerment at work.

Karl-Heinz Lambertz, President of the European Committee of the Regions, said: “We are here to give a voice to the regional communities. Getting the trust of the people is the most valuable asset for politics.

“We do not have the power to make decisions, but we have to listen to them. When the European Union decides something concerning regional policies, our opinion is necessary.”

A project by Murcia’s regional Employment service won a jury and an online vote. It offers support to women who were victims of gender-based violence to help them enter the labour market.

“Over the few past years, around 3,600 women have joined our programme. Among them, 2,800 have got a work contract.

In the climate category, the Finnish city of Li won thanks to a 50 % reduction in emissions from 2007 to 2015.
All public buildings in the city are now heated by renewable energy and all work carried out by council workers are done in electric cars.

Kristina Nurmenniemi, Project Manager of Micropolis Limited, said: “We’ve involved citizens in designing services with us, because 68% greenhouses emissions come from ordinary daily life. So we’ve invited people to design services with us.

“We do this true co-designing and co-production which means that we are listening people, we are observing how they are perceiving a good life”

A programme in Croatia’s Dalmatia-Split region walked away with the education and training award for having trained young farmers in organic production, creating jobs and a new industry in the region.

Jelena Petrov, Senior Advisor of Development and Coordination in Split-Dalmatia, explained the ideas behind the project: “The case in Croatia is that we have a lot of agriculture land that is not being used. All my friends have one hectare of lands somewhere, in the islands or in the interland.

“There is a kind of trend now, that people want to go back to the rural areas. They want to back to the land and not living in the cities.

“We have used that opportunity, we wanted to reduce to major things: one is the unemployment and the other thins is that we have resources in the land and we wanted to revitalize it and start producing food”

Among the winners is a Belgian initiative to provide networking and technological solutions to SMEs, and a German project integrating e-health, ambient-assisted living for elderly people.