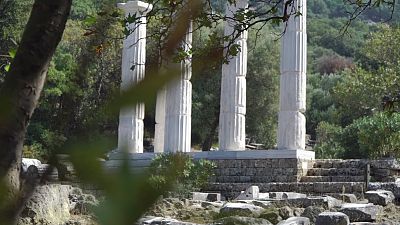 The Region of Eastern Macedonia and Thrace (REMTH), nestled between Bulgaria and Turkey in northeastern Greece, is a region of outstanding natural beauty.

Its two islands of Thassos and Samothrace, combine the best mountain and sea have to offer.

While it is famous the world over for its beaches, Samothrace also has some of the most stunning natural rock formations with pools of crystal-clear water, one of its main tourist attractions.

The island is even more famous as the home of one of the most celebrated sculptures in the world: the Nike of Samothrace, dating back to the 2nd century BC, which is currently on display in the Louvre in Paris.

“Behind us is the Sanctuary of the Great Gods. This is where the great statue of Nike – or Winged Victory of Samothrace – was discovered in 1863. Locals hope it will soon be returned to its homeland. But this area still draws Greek and foreign researchers, and new excavations are made every year,” says archaeologist Zoe Mitsakaki.

Stunning beaches, but also a rich and varied urban life. The region’s administrative centre Komotini is a bustling city, and neighbouring Alexandroupolis is home to one of the largest lighthouses in the Mediterranean.

The Old Town in neighbouring Xanthi is one of the best preserved architectural complexes in Greece.

“The region of Western Thrace in Greece is a melting pot of cultures. It’s a successful example of the harmonious co-existence between two different religions. Here, you will see Greek Orthodox churches and mosques standing side by side,” says Euronews correspondent Giannis Giaginis.

Whatever their beliefs, locals and visitors often meet up in the same places.

The distances between cities are short so you can easily drive from one to the other, and experience different cultural events and new tastes. Komotini, for example, is famous for its coffee, and Xanthi is home to the Carioca – a chocolate bite with a bitter-sweet flavour and crushed nuts in the middle. The name comes from Latin America and the famous Brazilian Cariocas.

“The ingredients to make carioca are chocolate, nuts, sponge cake and glaze. Here you can see the final stage, as it’s being covered in chocolate and cooled, ready to eat,” says chocolate confectioner Giorgos Arsenis.

The possibilities for active outdoors activities are numerous – you can take a swim at the beach and go skiing in the same day… and you might even have time for a stop at Nestos River for a ride in a kayak.

The coastal town of Kavala is famous for its harbour and ottoman monuments. Mohamed Ali, the founder of modern Egypt, was born here in 1769.

Not far away, you will find the UNESCO World Heritage site of Philippi, where Saint Paul founded the first Christian church in Europe.

“The Archeological Site of Philippi was founded by King Philip II, the father of Alexander the Great. We have visitors year round, not just from Europe but from all over the world,” says Kostas Antoniadis, head of tourism for REMTH.

Not far off is one of the best kept secrets of the region: the Aggitis cave, a true miracle of nature. Considered one of the longest river caves in the world, it stretches over an impressive 21 kilometres.

With its huge stalactites hanging from the ceiling, the cave offers visitors a truly magical experience.