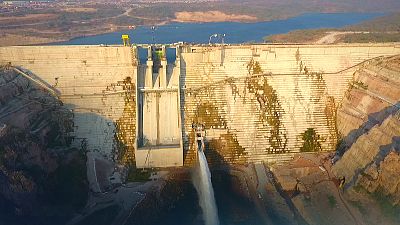 The economic potential of Angola has never been in doubt. The west African country is twice the size of France: It is a source of diamonds and is rich in oil and gas. So it has exceptional potential which should allow it to diversify its sources of income and develop its infrastructure

“The Kwanza River, the Kalandula Waterfalls, rivers and streams have not yet been developed, says Hannane Ferdjani.

“The county has enormous hydroelectric potential – one of the largest in Africa. Today, only four percent of these water resources are exploited. A situation which the authorities intend to remedy: The Laúca hydroelectric dam construction is one of the key stages of this huge project.”

Inaugurated just over two weeks ago, Laùca is the result of US$ 4billion worth of investment, and will produce 2,070 megawatts by May 2018. This is enough to power a city of 8 million inhabitants, thus doubling the energy capacity, in a country where 65% of the population lives without electricity.

Some 9000 people are tasked to ensure the installation of the six turbines are completed on time.

You can see first hand; the effects the dam is having on the lives of people, such as here in Dombo. It is an unusual evening for the inhabitants of the village 40 km from Laúca. Today, they will see their homes illuminated for the very first time!

Next step: The Caculo Cabasa dam, which is expected to produce an additional 2100 megawatts within four years. Ultimately, the Kwanza river will supply seven hydroelectric dams that will produce 7450 megawatts.

The major challenge is distributing all of this new energy. Connecting the Laùca dam, which is in the centre of the country, to Luanda; the main market in the west, brings huge logistical problems and is very expensive.

The Angolan capital is a hub of six million people, the economic lungs of the country. And yet electricity is scarce. The country’s electrification project poses many challenges. And the need to give up diesel, is crucial.

Francisco Talino, the chief executive of ENDE, says: “A litre of diesel can produce 3 kilowatt hours, but has additional maintenance costs: such as changing and buying the oil, investing in the equipment, people and so on. So it is very expensive.

“A huge connection project is underway. This is an important step in the transmission of electricity. The electrification project is a high priority for us because without it, it is very difficult for us to achieve our sustainable development goals.”

In some districts of Luanda, the generators are running at full speed. A diesel addiction that drove Fernando Miguel to leave Kikuxi, after nine years and nearly ten obsolete generators.

“It’s a daily struggle because there is no electricity, says Miguel.

“And there are districts where the situation is much worse. Some people have had no electricity for 15 or even 20 years (…) But it is hoped that with the Lauca dam and other electrification projects, we will finally have electricity in our neighborhoods. “

“You need to understand that the Angolan energy production capacity does not meet the national demand, says Ferdjani.”

Nova Cimangola is an great example. The cement plant has invested US$ 300 million in the production of clinker, a material used to make cement. Production that runs 24 hours a day.

“During a power outage, this plant will lose $ 500 every minute. We try to start our generators as quickly as possible when a break occurs, in order to preserve our equipment. Previously, in our first factory there were a lot of cuts.

“We were doing our best to make it functional but it was difficult. But today, with the new projects being undertaken in the country, it can be said that the availability and quality of electricity is satisfactory. “

The electrification program is in its infancy. But these are the firm foundations on which Angola hopes to relaunch and rebuild its economy.